How the Ghost of Al Franken is Haunting Brett Kavanaugh, Conservative Media, & #MeToo 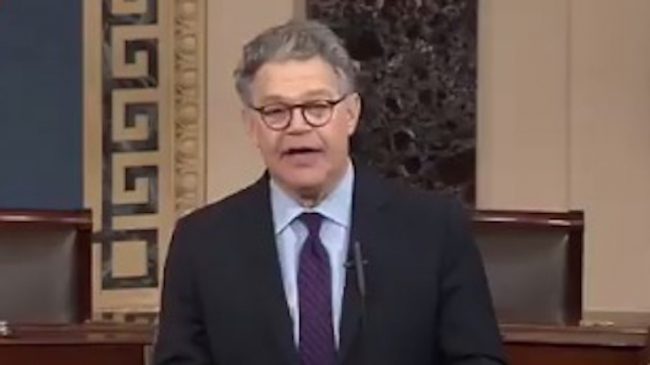 As one of the few commentators with the gall (foolishness?) to commit blasphemy by expressing consistent skepticism and concern about the #MeToo movement, I have watched mostly in horror, but with some amusement, as the saga involving an ancient allegation of sexual abuse against Brett Kavanaugh has unfolded. Revulsion because it sure looks like a good man is getting unfairly smeared, but gratification because the frailties of both the conservative media and the #MeToo movement have been exposed in different, but significant, ways.

Both the political left and right and right have compared — for very different reasons — what is happening now during Kavanaugh’s Supreme Court confirmation process to what occurred during the hearings for Justice Clarence Thomas when he was infamously accused of sexual harassment by Anita Hill. While there are obviously parallels here between those two circumstances, however, even more significant context for what is really going on can be found in the much more recent take down of former senator Al Franken, right at the beginning of the #MeToo movement.

In my view, as someone who never liked Franken (even as a comedian), he was clearly railroaded by a perfect storm of circumstances, and was not remotely a sexual abuser.  As I wrote at the time for USA Today, a close look at the allegations against him revealed they had far more problems than anyone in the media or the political realm had an incentive to understand or accept.

As Franken was in the process of getting destroyed by a bizarre alliance of the right and the left, I was actively imploring my former friends in the “conservative” (now largely “state-run”) media to resist their impulse to attack Franken simply because he was a wounded liberal. I tried to make the case that due process should apply to even people we wouldn’t mind see taken out, if for no other reason than that the next time we won’t be able to effectively argue against a rush to judgement against one of our guys.

Obviously, no one listened to me. But I knew, even then, that they would come to regret their cackling over Franken’s resignation from the Senate, and that day finally came late this week.

Obviously, we don’t know what, if anything, happened between Brett Kavanaugh and a fellow teenager back in high school almost forty years ago. However, the accusation, as it currently stands, so obviously should never have made it into the public domain that even some high-profile Democrats are embarrassed that it has.

In the realm of sex abuse allegations, which are notoriously difficult to prove (thus the understandable desire for #MeToo supporters to push the pendulum of justice too far in the other direction), there are numerous elements which should be present for a claim against a public figure to be considered credible. Among them are:

As far as we currently know, even guided by these extremely rational rules and rather low bar (please note that, while he is a good reporter, having Ronan Farrow do a story on an allegation does not, contrary to conventional wisdom, make that claim inherently true), the allegation against Kavanaugh apparently fails to meet even one of these guidelines. The issue of the accuser’s identity has been a subject of particular controversy in this matter, partially because Senator Dianne Feinstein, when she very suspiciously made a big show out of referring the accuser’s letter to the FBI, redacted her name from even that correspondence.

If there is one element of sexual abuse claims that, in light of the way the “rules” have changed (sometimes for the better) thanks to the #MeToo movement, must be adjusted, it is the issue of how we evaluate the claims of accusers who insist on anonymity and/or are unwilling to fully tell their stories even in private. After all, a person’s identity is clearly by far the most important piece of information, regardless of the subject matter, in evaluating their credibility.

There once was time when it made sense to not discredit an accusation simply because the accuser feared coming forward. However, #MeToo has successfully dramatically altered the equation which made that presumption previously sensible. Consequently, other “rules” must now be tweaked in order to maintain some small measure of equilibrium.

Obviously, if we are now going to embrace and believe everyone who makes a public claim, then we can’t still automatically presume that an accuser who won’t publicly tell their story is intrinsically believable (especially in a case like this one: since there is not an assertion of an actual sex act, there appears less for the accuser to feel ashamed about, particularly all these years later). In other words, #MeToo can’t have it “both ways,” because if they do, then we have lost all semblance of due process, and injustice is sure to ensue.

The “conservative” media has rightfully wailed that the nature, timing, and handling of the Kavanaugh allegation smell of a political hit job (one that, thankfully, has yet to gravely threaten his nomination). However, their case would be a lot more trustworthy if they had not been so willing to abandon principle when it came to blindly cheerleading a similar — though more complex — take down of Franken, which ended up working because members of his own party decided it was in their personal self-interest to knife him in the back.

The worst part of this situation is that Kavanaugh’s reputation has now been forever tarnished and we are unlikely to even remotely properly adjudicate this matter enough to know what really happened. All of which make this a story perfect for 2018, the year when the truth lost its meaning.