Joe Biden Sure Tells a Lot of Stories That Aren't True 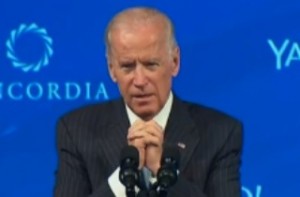 Here’s a question: at what point does the media address the fact that Joe Biden seems to say a lot of things that really, really don’t seem like they could possibly be true?

I’m not talking about easily verifiable lies, like saying the GDP grew X amount last year or that he voted for Y and Z bills. Biden, like all politicians, makes plenty of those of course. Nor am I talking about a Harry Reid-esque gleeful spreading of malicious lies and rumors about his opponents. He’s certainly straddled the line when it comes to acceptable rhetoric, but he’s never gone that far.

I’m talking about the Vice President telling anecdotes that, when submitted to even the lightest bit of scrutiny, just seem implausible. Other politicians exaggerate personal stories of course (see: Hillary Clinton’s Bosnian snipers and everything Donald Trump’s ever said). But Biden’s folksy-style usually involves invoking himself and his experiences when discussing complex political issues, often in a way that pushes the truth to its breaking point.

Take his comments yesterday about what he observed during a Hispanic Heritage Month event at the Vice Presidential residence earlier in September.

An awful lot of the Hispanic and Latino community, the leadership– how many 100, 150 showed up around the pool? People who had been involved in this their whole lives, Alex. And I stood up to welcome, and I looked out, and I could see sadness in everyone’s face. People walked in, like, literally down because of the beating, the beating Hispanics are taking at the hands of the Republican caucus… I mean the Republican presidential race.

Let’s set aside for a second that the man a heartbeat away from the presidency compared Republican policies to physically assaulting Latinos, and the media yawned. That’s a column for another day.

Show of hands; who actually believes that some of the most influential and powerful people in America were invited to a swanky poolside party at the Vice President’s mansion, and they all just stood around moping because Donald Trump said mean things about Mexicans on TV? And who thinks Biden is exaggerating or fibbing to illustrate how much he cares about Hispanics?

Now as it happens, MSNBC still has video of the event, which includes about ten minutes of footage before the speeches start. Unfortunately, the cameras are pointed away from the party. But it sounds like a normal party; laughing, joking, pleasant conversation, music playing. And when people do walk in front of the camera, they seem perfectly content. 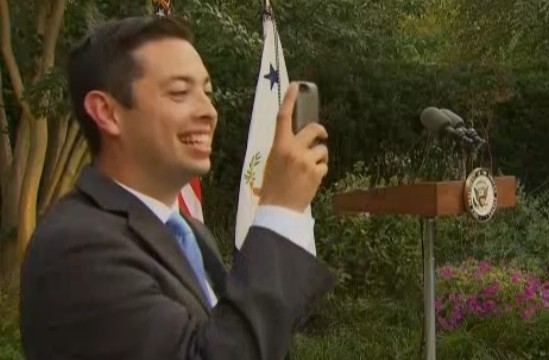 Again, there’s no direct proof Biden is straight-up lying. But the self-serving story he lays out just seems a little far-fetched.

Here’s another example of a story I consider even more unlikely from a speech back in July after the Supreme Court rule on gay marriage, recounting 17 year-old Joe Biden’s first exposure to homosexuality:

And so my dad on the way to his job in the morning, and this — if you know anything about — you probably don’t — my city of Wilmington, there’s a place called Rodney Square. And the buildings surrounding Rodney Square were the DuPont Company; the Hercules Corporation, which was big then; and ICI Americas, and so there were a lot of plain grey suits. And an awful lot of — at 8:00 in the morning, an awful lot of men and women hustling off to work.

As we were stopped at the light, two men on the right — very well-dressed men, obviously, business people working for either Hercules or DuPont turned and embraced one another and kissed each other. And they went their separate ways.

Let that sink in. In 1959, Joe Biden was driving through downtown Wilmington, Delaware and saw two businessmen kissing on a crowded corner in the business district, in full view of everyone. In a state where homosexuality wasn’t just discouraged, it was illegal.

His Irish Catholic father, who was born in 1917, saw the two men kissing, an act that for the past two thousand years or so Western Civilization had considered taboo at best and an abomination at worst. So he turns to his son and says, ‘Joey, they love each other.'”

And the happy ending to this story is that Biden was so touched by his father’s insanely prescient approval of homosexuality… he went to oppose gay marriage for nearly his entire career, right up to the exact moment public opinion flipped?

Who believes this tripe? More importantly, what kind of man comes up with it?

Now there’s a more serious recent example where Biden has been accused of exaggerating a very personal story. I hesitate to bring it up, because it is so deeply personal. But this is what Politico writes in their story revealing that Biden told New York Times columnist Maureen Dowd the details of his son’s death.

Before that moment and since, Biden has told the Beau story to others. Sometimes details change — the setting, the exact words. The version he gave Dowd delivered the strongest punch to the gut, making the clearest swipe at Clinton by enshrining the idea of a campaign against her in the words of a son so beloved nationally that his advice is now beyond politics. This campaign wouldn’t be about her or her email controversy, the story suggests, but connected to righteousness on some higher plane.

You ask me, that sounds a lot like D.C.’s political paper-of-record is implying the Vice President invented details about his own son’s death for political gain. Even if you believe Politico’s story is bunk, planted by the Clintons, or both, the mere accusation ought to be waaaay more newsworthy than it’s currently being treated.