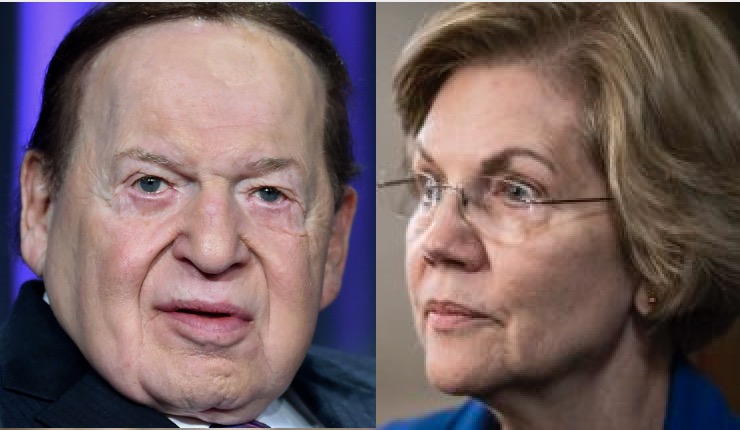 The morning after Sen. Elizabeth Warren savaged billionaire Mike Bloomberg on stage, possibly giving her flagging campaign new life, she went up with a new ad: Hitting Republican mega-donor Sheldon Adelson in his own Nevada newspaper, the Las Vegas Review-Journal.

“Here’s how much Sheldon Adelson pays under Elizabeth Warren’s wealth tax in the first year: $2,300,000,000,” the ad reads in bold lettering.

Adelson, the CEO of Las Vegas Sands, would only be paying 6% of his wealth, the ad states, enabling hundreds of thousands of Nevadans to have their student debt wiped out, as well as increased funding for child care, and free tuition at Nevada public universities, community colleges, and trade schools.

Adelson is the undisputed heavyweight among GOP donors, having donated nearly $80 million to Republicans in 2016 and $5 million to Trump’s inaugural festivities, as well as $55 million in Republican’s failed attempt to retain control of the House in 2018.

All of that spending makes Adelson a useful foil for Democrats, and it’s not the first time Warren has publicly hit him, criticizing the seeming quid pro quo of his donations, followed by President Donald Trump’s lobbying of the Japanese government to allow Adelson to open a casino there.

Sheldon Adelson is a casino tycoon & 1 of Trump’s billionaire buddies. He donated $20M to Trump in 2016. Now President Trump is lobbying the Japanese gov to let Adelson open a huge casino there. You’re not fooling anyone, @realDonaldTrump #EndCorruptionNow https://t.co/KJisMOOfGN

Warren in the last 24 hours has attempted to reclaim her mantle as a fighter, consistently hitting Bloomberg for his past policies and actions as the head of Bloomberg L.P., and now going after Adelson in his own newspaper.