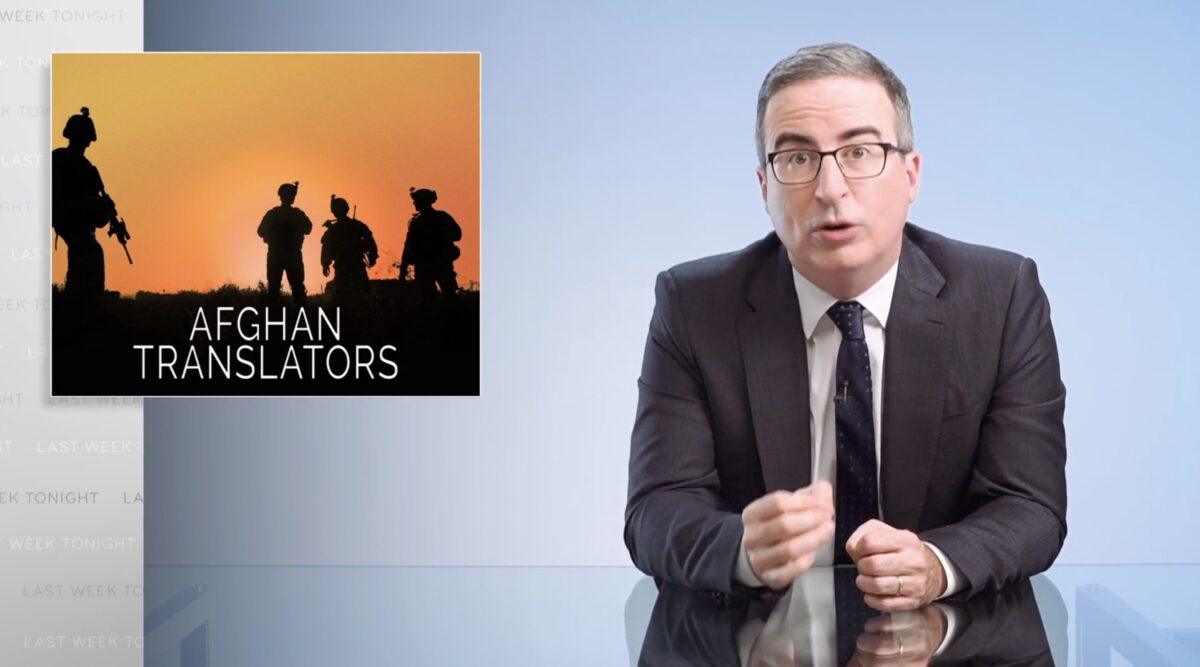 John Oliver went after President Joe Biden for his failure to protect Afghan allies and translators working for the United States military before the August 31 deadline to pull troops out of the country.

According to veteran-led nonprofit No One Left Behind, 300 Afghans who served as interpreters to U.S. troops have been murdered by the Taliban since 2014.

“About 18,000 Afghans who worked with U.S. troops as interpreters, translators or in other positions are eligible for a special immigrant visa to leave the country for their safety,” reported CBS News — adding that the number rises significantly when their families are included.

These interpreters, however, remain in danger — as many have received death threats or have already been killed —  while waiting for the Biden administration to grant them special visas to enter the United States.

“This is a situation Biden’s hair should be on fire about. Because the fact is, there are thousands of Afghans who helped U.S. troops during the war who badly need to be evacuated because the Taliban very much want to kill them,” Oliver said. “And I will say, publicly, Biden has been sending some encouraging messages.”

The host played a clip of Biden ensuring Afghans who remained loyal to American troops that they would have a home in the U.S. if they choose to — promising to stand with them as they stood with us.

“Oh, well, that sounds great!” said Oliver. “Although the ‘if they so choose’ part is doing a lot of work, because it’s clearly not so much their choice as it is ours. We are the ones in charge of the process.”

“Putting the choice on the applicants is basically a surgeon handing you a scalpel saying, ‘There is a tumor-free pancreas in your body if you so choose and I will stand with you,”’ he cracked. “I think you might be fundamentally confused about who has power over the outcome here.”

Oliver went on to decry Biden for the immigration crises many Afghan translators are experiencing as they wait for approval on their impending visa applications — calling it “the Bill Cosby comeback of political crises.”

This is a topic Oliver has been bringing attention to since 2014 — when he dedicated a segment to translators who have aided the U.S. Military in Afghanistan and Iraq.

He reminisced about that segment on Sunday, reminding viewers of the disaster that immigration can be, even with special immigrant visas granted to interprets, as many wait years for their applications to still get rejected for unknown reasons.

“And the administration may point to the fact that this month, 2,500 Afghans have been flown in stages to an Army base in Virginia, and that they’re negotiating with countries like Qatar and Kuwait to house Afghans at military bases while they await visa approval, but so far, a tiny percentage of the people in the pipeline have been evacuated,” he said. “And the fact that we are just scrambling now for a plan is inexcusable when we’ve had 20 years to develop one, and for around half that time, Biden was in the White House.”