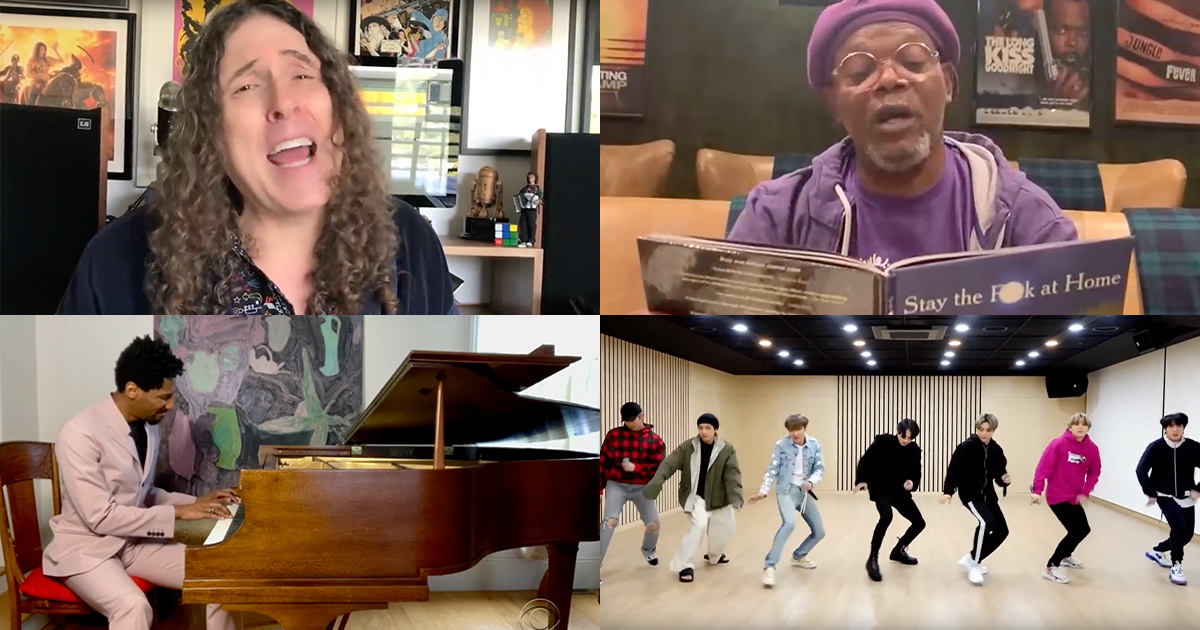 This is week three of all of late night stopping normal production during the coronavirus pandemic. But hosts have continued doing shows from home and brought in plenty of special guests to entertain viewers. We’ve put together some of this week’s highlights below:

Jimmy Fallon had some pretty big guests on his show this week, from Demi Lovato to Joe Biden. But this week also featured none other than Weird Al himself performing “One More Minute” from Dare to Be Stupid, reinterpreted as a pseudo-social distancing anthem. And it was a milestone for Yankovic, because “this is the first time I’ve done The Tonight Show without wearing pants.”

Fallon also spoke with Adam Sandler (who was robbed for Uncut Gems goddammit). The two swapped stories about working on Saturday Night Live and about meeting the great Robin Williams. But Sandler also shared some of his trademark musical comedy with a new quarantine song he wrote specifically for getting through this pandemic, shouting out the doctors and nurses on the front lines.

The Late Show also paid tribute to two musical greats this week: John Prine, who is currently hospitalized with the coronavirus, and Ellis Marsalis Jr., who tragically passed away from the coronavirus this week. Colbert shared a duet he performed with Prine in 2016 but never broadcast (saying at the time “we’ll probably do this for the internet, unless, you know, something terrible happens and we have to cheer up the world on the TV show”). Late Show bandleader Jon Batiste paid musical tribute to Marsalis, a man he called both a mentor and a friend.

You might remember a few years ago when Samuel L. Jackson read the audiobook version of the hit not-really-a-children’s-book Go the Fuck to Sleep, written by Adam Mansbach. Well, they delivered a perfectly-timed sequel, Stay the Fuck at Home, this week, and Jackson read the new book as he chatted with Jimmy Kimmel.

Kimmel also spoke with Utah nurse Kimball Fairbanks, who recently contracted the coronavirus and has taken steps to self-isolate so her family isn’t at risk. Kimmel brought on Jennifer Aniston to surprise Fairbanks and the two of them announced she and every other nurse on her floor will be receiving gift certificates from Postmates.

In addition to speaking with presidential Bernie Sanders this week, Seth Meyers spoke with Senator Elizabeth Warren, who talked about what she would do to fight the coronavirus pandemic more effectively and address the stimulus package passed by Congress. Meyers also briefly asked about presidential politics, whether she would be open to serving as VP, and how she hasn’t endorsed just yet. Warren told Meyers right now her focus is on this current crisis.

Meyers also checked in this week with longtime friend and colleague Amy Poehler to talk about everything from quarantine to Parks & Recreation. But the former Weekend Update co-hosts also brought back their REALLY!?! segment to blast “haunted corn cob doll” Mitch McConnell for saying impeachment distracted the government from coronavirus. “Even Trump does not buy your dumb argument! That must feel like getting a note back in 6th grade with the ‘no’ box checked!”

James Corden returned to air this week with a #HomeFest special, saying that in a time of great divisiveness, “This virus has shown that we are all equal. We are all simply human. This virus doesn’t discriminate in any way. It has reminded us how our behavior can hurt other people.”

Late night shows being stuck at home have, of course, not stopped the musical guests from coming in, and Corden’s special featured plenty of artists from John Legend to Andrea Bocelli performing for viewers. The special also featured K-pop super group BTS, performing their hit song “Boy with Luv” from quarantine in South Korea.

For a lot of people stuck in quarantine, it may he hard to keep track of time, so Trevor Noah assembled a panel of correspondents to try and definitively answer the question of what day is it. Is is Friday? Is it Sunday? Are the days getting longer? What even is a day anymore? (We do have some good news for them and everyone else stuck at home, thanks to the good folks over at Fox 8 Cleveland…)

Noah also spoke with Bill Gates and immediately asked him about a TED Talk he gave five years ago warning about how we need to be ready for the next big global epidemic. And Noah wanted to know how Gates could see this coming but plenty of people in positions of power didn’t. They also talked about the need for more tests not just in the United States but globally.

How has Samantha Bee been faring hosting her show from the woods? Well, this week she went full Katniss Everdeen for the sake of her family’s survival. So there’s that.

Bee also highlighted the impact of the coronavirus on women in particular, especially nurses on the front lines worried on a daily basis about running out of needed supplies. There’s also the serious issue of what options pregnant women have to give birth amid a pandemic, including at-home births.

John Oliver did another show from his “blank white void full of sad facts” this week calling out President Donald Trump’s inconsistent statements over the past month on combatting the coronavirus. He played the audio of Trump saying “all of a sudden” Andrew Cuomo is asking for thousands of ventilators, comparing him to someone who goes, “You walk into most houses, they got some sinks, maybe a few cups, now all of a sudden they’re on fire and they say they need hundreds of gallons of water sprayed at them with hoses. I just don’t buy it.” (Also, if you watch the full episode, you may notice Oliver also spurred on an, um, unusual art hunt…)

Desus & Mero returned this week, scoring an interview with Dr. Anthony Fauci, giving perhaps as much insight into the man himself as the work he’s doing. The hosts asked a good mix of important coronavirus questions for viewers, especially young ones, to hear the answers to, and questions about Fauci’s Brooklyn background and love of the Yankees. At one point Fauci burst out laughing when informed about this bonkers 5G conspiracy theory going around.

They also had fun with one of the lighter stories from New York in these difficult times: does Andrew Cuomo have nipple piercings? “I wouldn’t be surprised if he had a Prince Albert too, that’s like a serious nipple ring.”

Conan O’Brien returned to air this week too and checked in with Andy Richter about how they’re both doing in quarantine. They briefly went off on a fun tangent when Richter noticed George Takei on TV and O’Brien shared an anecdote about how he initially tried to get Takei to guest star on “Marge vs. the Monorail,” one of the best Simpsons episodes, but he wouldn’t do it because he didn’t want to make fun of public transportation. And then they ended up getting Leonard Nimoy on instead.

O’Brien also paid tribute to another musical great, Adam Schlesinger, who passed away from the coronavirus this week. Not only was Schlesinger the co-founder of Fountains of Wayne, he did a lot of great music for film and TV, most recently writing songs for the hit show Crazy Ex-Girlfriend. O’Brien talked about an appearance Fountains of Wayne made on Late Night after 9/11 and shared that performance of “Better Things” with viewers. “I can’t think of a better song for these times.”

Bill Maher returned from break this week as well, hosting Real Time from his backyard and doing his normal monologue with a winking laugh track of sorts. He assured viewers he hasn’t been feeling any symptoms, “unless you count shitting my pants every time Trump talks.” He caught up on mocking the president’s multiple coronavirus press briefings and how he’s spending time “bragging about his ratings.”

Maher checked in with a number of guests one on one, including Los Angeles Mayor Eric Garcetti. Maher told Garcetti he knows officials like him have to walk a tightrope dealing with the president: “You want to tell the truth. On the other hand, if you say anything critical, this president has shown that he will deny essential services and equipment to states that aren’t nice enough to him.” So he bluntly asked the mayor, “How are your praising skills?”

News broke this week that Lights Out With David Spade won’t be returning to Comedy Central when late night shows can go back to normal production. Per Deadline, the show is being shopped around and may find a new home, but right now Spade is continuing his “lo-fi” show, this week speaking with producer Rick Kirkham about the insanity of Tiger King and what Joe Exotic is like in person.

Spade also brought on comedians Greg Fitzsimmons and Yamaneika Saunders to make sense of Tiger King, including the, um, interesting decision for OJ Simpson to post a video suggesting he thinks Carole Baskin killed her husband.