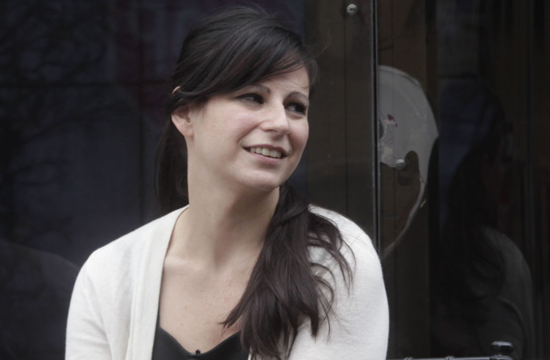 Over the next year, we’ll proudly be featuring Amanda Cohen’s column “Lady Chefs” on our site, where she’ll profile (in the way that only Amanda Cohen can) prominent, game-changing women in the history of food — writers, chefs, provocateurs, you name it. As an introduction, we sat down with the chef/owner of New York City’s Dirt Candy to ask what she learned from her research, and to grill her about her unique literary style. Be sure to stay tuned for tomorrow’s first column profiling the brilliant Elena Arzak!

What is your process for finding and selecting the lady chefs you profile in this series?

I use Google but it’s very hit or miss. Search for “female chefs” and you generally get the same 20 – 30 women over and over again, and many of them are food writers, not chefs. So I’ve wound up with one search, leading to another search, leading to a third more specialized search. But the short answer is: wherever I can find them.

What have you learned about yourself or your own cooking philosophy from looking back at other lady chefs in history?

It’s always hard work no matter who you are. There isn’t a single lady chef who hasn’t worked incredibly hard to get where she is.

Does the comparison of historical figures to the state of women in cooking now give you a glass half-full outlook (ie., look how far women have come) or a glass half-empty one (ie., culinary culture should be embarrassed that it still has so far to go)?

I don’t think women in kitchens has an end point. There’s no target or goal, so it’s hard to make any measurement of progress because I’m not sure what we’re supposed to be progressing towards. But when I started doing this, I thought that there were probably lots of female chefs and restauranteurs who were important, but were ignored by the press and had fallen out of history through neglect. It turns out that I was more right than I thought. Take Eugenie Brazier, who was the first chef to have six Michelin stars. When Alain Ducasse moved to New York in the 2000’s everyone went on and on about how he was the first chef to have six Michelin stars, and I can’t blame them. I had to do some digging to find Eugenie Brazier, but she had six stars almost 60 years before Ducasse. The narrative we have today is that famous and influential chefs are mostly men. The reality is that it’s always been a mix, but we’ve forgotten about the women.

Is the ultimate goal of gender equality in kitchens achieved when women get the recognition they deserve or when gender stops mattering altogether? (Or is it as simple as when there’s 50/50 split of men and women working together in kitchens?)

To me, the goal is more about changing the perception than the reality. Lots of women work in kitchens, they just don’t get the same exposure as the men. If Food & Wine did their “Best 10 New Chefs” issue and there was more than one woman for a few years in a row, that would be a big deal. Actually, if they nominated more than one Hispanic, African-American, or South Asian chef that would be huge.

What historical female chef would you love to cook with?

I wouldn’t want to work with any of them because they’d probably spend all their time yelling at me. But there’s a description of a meal cooked by the Song Dynasty chef, Son San Niang that I would have loved to have watched. She had 80 chefs working at tables facing her, then she sat on a raised platform and gave them orders for hours using a system of colored flags. I keep wanting to do that at Dirt Candy but we’re too small.

What is your advice for young chefs? Is there advice you would offer specifically to female chefs?

Find the toughest, busiest restaurant you can and get a job on their line. Stay for at least a year. The first few years of working in a professional kitchen are going to shape the rest of your life, so don’t slack. Don’t call in sick, don’t show up late, don’t screw off. Get on that line no matter what and realize that for that first year your best will never be good enough. You will have to get better every day, or you will crash and burn. But if you put in the work now, your technique will support you for the rest of your life.

There was the night that a shrubbery kept getting closer and closer to one of the tables every time I turned around, but I could never catch it moving. I think that might have been him.

Were you a fan of comic books growing up? If so, what are some of your favorites?

I was more a fan of Archie and Little Lulu than anything. My husband’s the big comic book nerd which means I get to push him into the lockers and cyberbully him relentlessly.

A food book in a comic-book format should be an obvious editorial choice for authors, chefs and publishers, simply based on the fact that food is such a visual medium. Yet so far, in terms of Real Food Cookbooks, we’ve only seen your book and Bourdain’s Get Jiro, and even then, yours is more of a traditional memoir/cookbook than his pulp fantasy. Is this a trend that you think will catch on, and why hasn’t this already been A Thing?

I’m surprised too, but I think you can chalk it up to the essentially conservative nature of publishing. An imprint that publishes cookbooks doesn’t know how to do a graphic novel (and vice versa), so it’s a big leap for them to try to do something new. But a lot more are coming. Lucy Knisley’s cookbook/memoir/graphic novel RELISH is coming out in April, and Saveur Online has been doing recipe comics for a while.

Any particular reason to print in black and white?

There are obvious benefits to working in this medium, particularly since, as you mentioned in an interview with the NYT, you’re able to capture the physicality of a kitchen, certain steps in the cooking process, etc. Were there any obvious drawbacks? (Pardon the pun.)

(Don’t worry about it – you won’t be PUNished.)

You know, this is so new that I’m not sure if there are any drawbacks. If someone perceives a drawback I’d suggest that it’s more a failure of their imagination than anything else. Not many people are doing this so there’re no rules yet on how to do it. I’m sure once this becomes A Thing there will be all kinds of boring and limiting conventions that get established, but for now it’s all wide open spaces and very few boundaries.