Lady Chef Stampede: Here’s Why Amy Scherber Is The One Baker Ever To Be Profiled In This Column 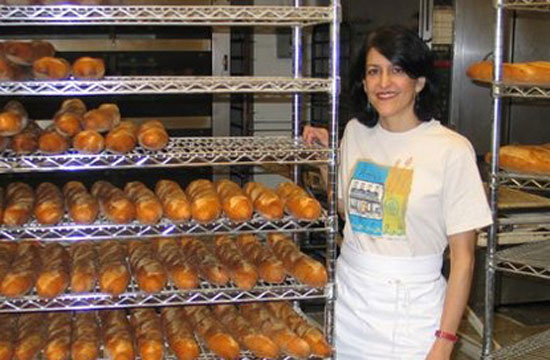 This week, on the Lady Chef Stampede, we get baked with Amy Scherber, the woman behind Amy’s Bread. Normally I am deeply suspicious of bakers, regarding them as a mutant offshoot of pastry cooks (if you want to know about pastry cooks, I suggest trying reading some H.P. Lovecraft, who wrote about them in great detail). But two things made me want to write about Scherber.

Originally from Minneapolis, Scherber moved to New York and went into marketing before going to New York Restaurant School in 1987. Afterwards, she worked pastry at Bouley and Mondrian before she realized that she liked baking things as long as they weren’t dessert. Time for a trip to France where she worked in three different bakeries before coming back to New York City to open one of her own.

In 1991 there was a big hole in the NYC market. There weren’t many high end bakeries in the city and restaurants were mostly serving nondescript rolls. Fancy artisanal breads weren’t a thing. Scherber realized that this was a market she could corner, so she found a storefront in Hell’s Kitchen with cheap rent and opened Amy’s Breads in 1992. Raising money was a pain because she couldn’t find any investors, and the banks laughed at her idea of an inexperienced woman making money from baking. She also didn’t want to go to her friends and relatives, because she wanted to re-invest her profits in the bakery and couldn’t guarantee a return on their investment. She wound up taking bank loans when she needed money, and making sure she paid them back.

At first she sold three breads: a country sourdough, a black sesame, and a semolina with raisins and fennel, which became one of her signature loaves. When the bakery began to attract attention from the New York Times and other food world outlets she added sweets and slowly expanded production. In 1996 she opened a bakery in Chelsea Market, and it became the center of all her operations. Next she opened a store on the Upper East Side which never broke even so she had to shut it down. Then she opened a store in the West Village that did well. In 2012, she moved all her baking to the former Oreo factory in Long Island City.

In 1996, she published a cookbook, Amy’s Breads, and these days she oversees 150 employees between her four operations and makes 200 wholesale deliveries every day. With her storefronts selling cakes, scones, sandwiches, and bread she’s able to be involved more in the marketing and in product development, which is the fun stuff if you’re a chef. She also makes a ton of television appearances.

Like I said before, I wasn’t going to include bakers in the Lady Chef Stampede since I don’t understand them, but I read two quotes from Scherber that really spoke to me. The first comes from an interview with Star Chefs:

“When first opening a store or restaurant, you have to start with a small base then build your way up. My first store in Hell’s Kitchen was small with cheap rent. [Once we knew it worked], we began adding on sweets and expanding our production. Slow, steady, and managed growth is essential. After I expand, I usually spend three years at a plateau where I really don’t spend money just to make sure that I can manage. I opened a store on the Upper East Side (before the West Village store) – it was a small place with expensive rent. We weren’t breaking even, and I had to close it.

The West Village store is a little smaller and has higher rent, but it’s much busier [than the Upper East Side store], so it could sustain itself. You need to constantly study and analyze food costs, labor costs, and the unexpected costs. There are things that break and equipment that needs to be replaced or repaired. In our Chelsea store, we had a little graffiti etched into one of the large window panes; insurance covers some of it, but then my insurance goes up! There are a lot of little things that you just don’t think about but have to take into your costs.”

First off, I respect a woman in this business who’s willing to talk nuts and bolts. So many chefs base their careers on smoke and mirrors, hiding the real work from their customers, that sometimes I think we all live and breathe the air of a magical kingdom where tiny unicorns deal with all the actual nitty gritty details that I feel like I sweat over every single day. Second off, in the second paragraph she demonstrates all the problems that come with being a business owner that no one thinks about. Things break all the time, equipment constantly needs to be replaced, and sometimes I feel like I’m on a treadmill where I have to keep ordering new cooktops or I fall off and get crushed by broken Cuisinarts. Also, the graffiti – yes, it’s an art form, etc. but when you own a business and are having to repaint all the time because awesome kids whose trust funds pay for their skateboards like to tag your storefront to prove how “street” they are and how their mom and dad can’t tell them what to do, man, you have a different perspective.

The second quote comes from an interview with LadiesWhoLaunch.com:

“I have been burned by people who have figured out a loophole to steal product or money. They’ll ring something up a different way… they’re (ringing up) the item as $1 when it’s supposed to be $5, so they get a $4 tip. Every time it happens, it’s just like being punched in the stomach. Then you have to regroup and figure out how it happened and why. Why does an employee have a sense of entitlement when we have tried to treat them well and pay them well? When these things happen, it’s been shocking because people who have been stealing have been those that I have trusted.”

It’s not so much what she’s saying (I personally love employees who steal because you always catch them and it’s so cathartic to see their faces when you fire them) but the fact that even with hundreds of wholesale customers, three locations, and a giant bakery in Long Island City, she’s still feeling the pain when some person on a register steals $4. That’s what it’s like when you own a business. You have all these big things going on, and from the outside people think you’re lounging around on a rainbow coming up with recipes and enjoying your success, and really what you’re doing is sweating blood over your prep cook’s schedule, or trying to make sure your dishwasher is fixed by service or worrying about someone stealing $4.

So, Amy Scherber, I eat a cake to you tonight, and raise high my glass of wine. You have convinced me that bakers…they’re just like us.