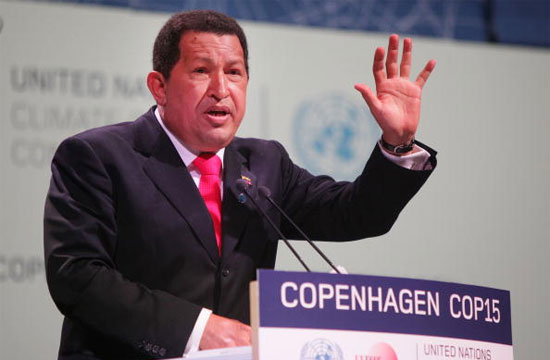 BBC: While the news of Hugo Chavez’s death will undoubtedly lead to endless discussions over his legacy in South America and the future of Venezuela’s oil trade, it’s worth recalling his prominent programs attempting to tackle hunger and food equality — and the fact that many of those programs actually led to food shortages, skyrocketing food prices, the decline of Venezuelan agriculture, and a heavy reliance on imported food.

Gizmodo: This list of the eleven most useless kitchen uni-taskers (tools with only one specific use, not an uni scooper) made Alton Brown cry. Really.

Huffington Post: After finding large amounts of the coliform bacteria in recent products shipped from Sweden, China destroyed two tons of chocolate cake from IKEA, as well as untold numbers of chocolate bars and cream cheese. Don’t be sad for too long, though: “coliform bacteria” is just a scientific term for “fecal matter.” Way to go, China–you got the food safety thing right this time.

Dry Soda: Richard Blais’s newest venture involves a mysterious new beverage called “dry soda,” which we presume is a soda that comes in powder form that you eat out of your hands. Wait. “Dry Soda” is just the name? It’s just seltzer? And Blais is going to “work with the company on flavor, recipe and cocktail innovation”? Okay then. We like seltzer. NBD.

The Washington Post: Food section editor Joe Yonan reveals himself to be that evil antithesis of homo carnivorus: a vegetarian. The funny thing is, everyone he knew — chefs, writers, family, friends — treated his revelation like another type of coming-out: “They were the equivalent of those parental hand-wringers ‘Is this a phase?’ and ‘Where did we go wrong?’ I’m expecting someone, somewhere, to say, ‘You know we love and support you, no matter what you eat.'”

New York Times: You can win a chance to cook along with Nigella Lawson and Julia Moskin in a video chat with the NYT’s Dining Section! It will be exactly like cooking along with Nigella, except this time, the computer will respond to you and address you by name — and it won’t be a figment of your imagination!