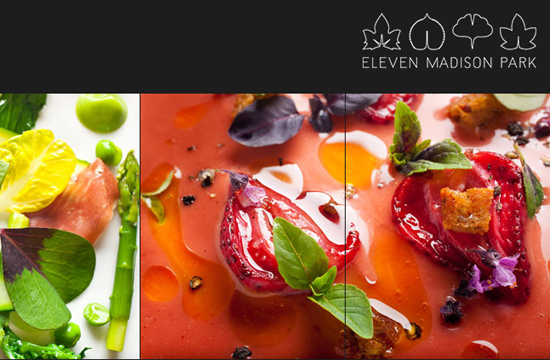 What do you do when you own a universally-adored restaurant that’s earned three Michelin stars, four New York Times stars, one Top-10 placement in the World’s Best Restaurants list, and, a true indicator of its success, four and a half stars on Yelp?

Normally the answer would be “don’t mess with the formula.” But the Times reports that Daniel Humm and Will Guidara have different ideas: beginning this fall, they’re going to transform Eleven Madison Park’s dinner into a dazzling, showy, Broadway-esque affair. The goal: “to convert the Eleven Madison Park experience into an extravagant, participatory, close-to-four-hour ode to the romance and history of New York.”

This could go really, really well, or really, really badly, they note: whereas “wild, thought-provoking leaps are required for greatness” as demonstrated by EMP’s peers, like Noma, Alinea, Mugarritz and Arzak, it often goes horribly, horribly wrong.

And Humm and Guidera look like they’re going all out, with a four-hour long marathon, participatory dining experience, even for lunch. And it involves ILLUSIONS:

Their vision, too, is all about New York. They want Eleven Madison Park to evolve into a restaurant not just in the city, but about it.

Scores of elements of the menu and presentation — like the ceramic bowls and the raw oysters; the sea salt and the leather used in the coasters; and the apple brandy that servers will pour toward the end of the meal — will come from New York-area artisans and artists, distillers and farmers.

…Mr. Humm and Mr. Guidara have met with Kenneth T. Jackson of Columbia University, an expert on the city’s expansive history, as well as magic specialists from a company called Theory 11. In an allusion to the illusion known as three-card monte — once a fixture of the New York streets — they are working on developing a trick (as well as a special Eleven Madison Park deck of cards) that could be woven into a dessert course.

Given that these two managed to transform a humble brasserie into a world-class dining experience, their peers, from Danny Meyer to Grant Achatz and Eric Ripert, are confident that Humm and Guidara can pull it off.  “In my opinion, he’s the next big shot here in New York,” says Ripert. But at the same time, “he’s taking a big risk.”