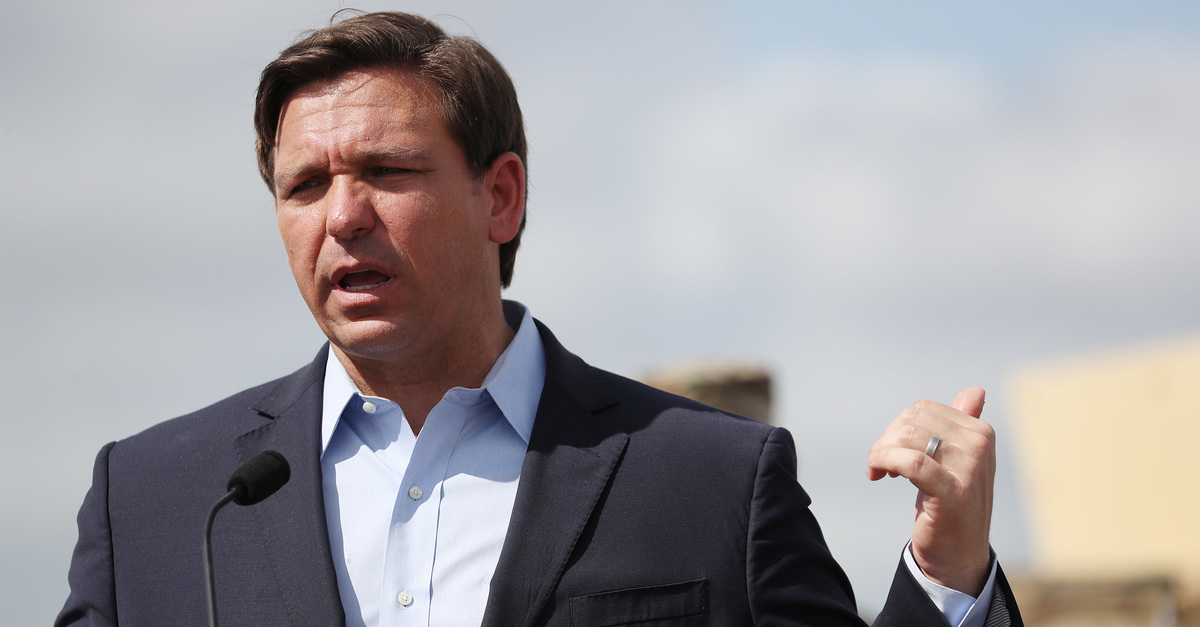 The Associated Press sent a letter to the office of Gov. Ron DeSantis (R-FL) asking him to stop “harassing behavior” from his spokesperson over an article this week.

With covid cases continuing to surge in Florida, DeSantis has been announcing multiple Regeneron monoclonal antibody sites where people with covid can go for treatment. On Wednesday the Associated Press reported that the company of a top DeSantis donor has invested in Regeneron.

Citadel, a Chicago-based hedge fund, has $15.9 million in shares of Regeneron Pharmaceutical Inc., according to filings with the U.S. Securities and Exchange Commission. Citadel CEO Ken Griffin has donated $10.75 million to a political committee that supports DeSantis — $5.75 million in 2018 and $5 million last April.

It’s not unusual for hedge funds to have a wide range of investments. And BlackRock, which has primarily donated to Democratic candidates, though has also donated substantially to Republicans, has a large holding in the company – more so than Citadel.

The AP quotes DeSantis spokeswoman Christina Pushaw as saying, “Claiming that there is somehow ‘corruption’ by promoting the baseless political narrative that Governor DeSantis supports Regeneron over COVID vaccines (completely false, but that is another topic) is not even logically consistent when you examine the SEC filing… Citadel holds far more shares of Pfizer and Moderna than Regeneron.”

The report itself notes that “Citadel’s investment in Regeneron is a tiny fraction of its overall $39 billion in investments,” and says that President Joe Biden himself supports the treatments. Pushaw decried the story and unleashed on AP reporter Brendan Farrington over the headline “DeSantis top donor invests in COVID drug governor promotes,” calling it “cheap political innuendo.”

In a blaze of tweets that evening, continuing until 3 am ET and throughout the day, she accused Farrington of elevating “BlueAnon propaganda,” called out his boss on Twitter, brought up how the Biden administration has encouraged those treatments, and — in since-deleted tweets — said, “Fix your conspiracy BS or I will put you on blast” and “Drag them.” (This is only a sampling of the many tweets Pushaw has posted since Wednesday.)

Hey @bsfarrington. Sad to see this cheap political innuendo from AP. Should be “DeSantis & Biden Agree Monoclonals Save Lives.”

You KNEW this isn’t a story. You KNOW you can’t defend it. You said your “boss’s boss” wouldn’t change the headline—& you refused to tell me his name. pic.twitter.com/5dA5jP1Ys1

This is why I am so angry. Because @bsfarrington KNOWS BETTER and did the hit piece anyway. Shameful. https://t.co/o5qivdwMtp

Pretty sure it’s @ravinessman, though @bsfarrington refused to tell me that. Ravi, why do you force your journalists to politicize lifesaving COVID treatment? Farrington knows this story is nonsense. Yet he, you, and Ian are feeding the BlueAnon conspiracy fodder anyway. Shameful https://t.co/wM8dognYUR

Good night to everyone except two-faced AP activist @bsfarrington, who wrote a story he KNOWS is BS, bc Nikki Fried’s political consultant pushed it on Twitter. If someone decides not to get lifesaving COVID treatment bc you politicized Regeneron, that’s on you. cc @ravinessman pic.twitter.com/VLr6CUO3pU

This was my mistake. I now realize @bsfarrington is duplicitous and cannot be trusted to distinguish between news stories and BlueAnon propaganda. Or worse yet, he does know the difference, but chooses the propaganda. Extremely disappointing. https://t.co/GcQ4ZOo03l

I was on the phone w/ @bsfarrington & his boss Ian for hours tonight. They could not explain: the basics of hedge funds, who holds shares of Regeneron, or who is making money from Gov. DeSantis’ promotion of monoclonals (answer: no one). They said @ravinessman wanted the headline https://t.co/9uL8n6cAVF

Citadel isn’t even a top 100 shareholder in Regeneron. BlackRock is #2. The same BlackRock that donated to Biden’s campaign and has ties to multiple Cabinet members. The White House promotes Regeneron too. Yet MEDIA ACTIVISTS don’t FABRICATE CONSPIRACY THEORIES about that.

Just because there wasn’t a concrete error doesn’t mean the entire story wasn’t misleading. There is zero evidence of any conflict of interest or corruption. Because it didn’t happen. Stop feeling sorry for yourself. Take responsibility. Nobody should be sending death threats https://t.co/WWmsGdgpCV

Good morning to everyone except @bsfarrington & @ravinessman from AP, who STILL refuse to change a headline that they know is misleading.
& any other media activist who prioritizes defending their cheap political attacks rather than raise awareness of lifesaving COVID treatment.

Typical media activist. He knowingly pushed a baseless conspiracy to attack DeSantis, but the REAL victim is him, because people are calling out his misleading story on Twitter and — he cannot actually defend anything he wrote. https://t.co/NuhX2hPd3S

Now criticizing a journalist who knows better for writing a misleading innuendo-laden conspiracy theory (there was no “story” to break) is harassment? 🤦‍♀️ https://t.co/djanA5Ck85

I deleted it only because the deadline of 8am was no longer relevant after Brendan Farrington informed me at 10pm that he would not fix the misleading headline. At that point there was no reason to stay silent while his health misinformation flooded the country. https://t.co/PBzSoEHhjX

Farrington tweeted that he was getting death threats before making his account private.

I can’t believe this needs to be said, but nobody should be sending death threats to anyone else. Also, journalists shouldn’t write stories to discourage COVID patients from getting lifesaving regeneron by politicizing a clinically proven treatment.

On Wednesday DeSantis alluded to the piece as he decried “people trying to push political agendas” surrounding the treatments.

Those who try to politicize COVID treatments are doing a disservice to those who may be deterred from seeking life-saving treatments.

Monoclonal antibody treatments have a proven record of reducing the need for hospitalization and are available free of charge to patients. pic.twitter.com/U5vw2nimfj

On Friday Associated Press executive VP and chief operating officer Daisy Veerasingham — recently announced as the next AP president and CEO — sent a letter to the governor calling out “the actions of your press secretary this week that were both dangerous and in conflict with the spirit of Florida’s constitutional protections for freedom of speech and of the press.”

“Using her Twitter account, Christina Pushaw threatened a journalist, retweeted other threats against that journalist and issued a call to action against The Associated Press. This is unacceptable behavior from a government employee,” Veerasingham writes. “This type of harassing behavior can cause great harm.”

The @AssociatedPress is writing @GovRonDeSantis today re: his press secretary, @ChristinaPushaw, and her “direct effort to activate an online mob to attack” a @FLPressCorps reporter. “We call on you to eliminate this attack strategy from your press office,” the AP’s exec VP asks. pic.twitter.com/ghyK7Lwy2K

The letter takes particular note of the since-deleted “drag them” tweet. According to the AP’s own report on the letter, “Pushaw said she did not mean her ‘drag them’ comment to be taken as a threat, and she deleted it because she realized not everyone would know what it means.”

Pushaw responded to the letter saying no one deserves death threats, and accusing the AP headline of “threaten[ing] public health and safety.”

Nobody deserves to receive death threats. At the same time, Brendan Farrington’s irresponsible reporting endangers the lives of Floridians and AP owns that.

The only words that threatened public health and safety were the words in the AP hit piece, specifically the headline. https://t.co/mWMi8oCOcy

UPDATE: Pushaw has reportedly been suspended from Twitter for 12 hours.