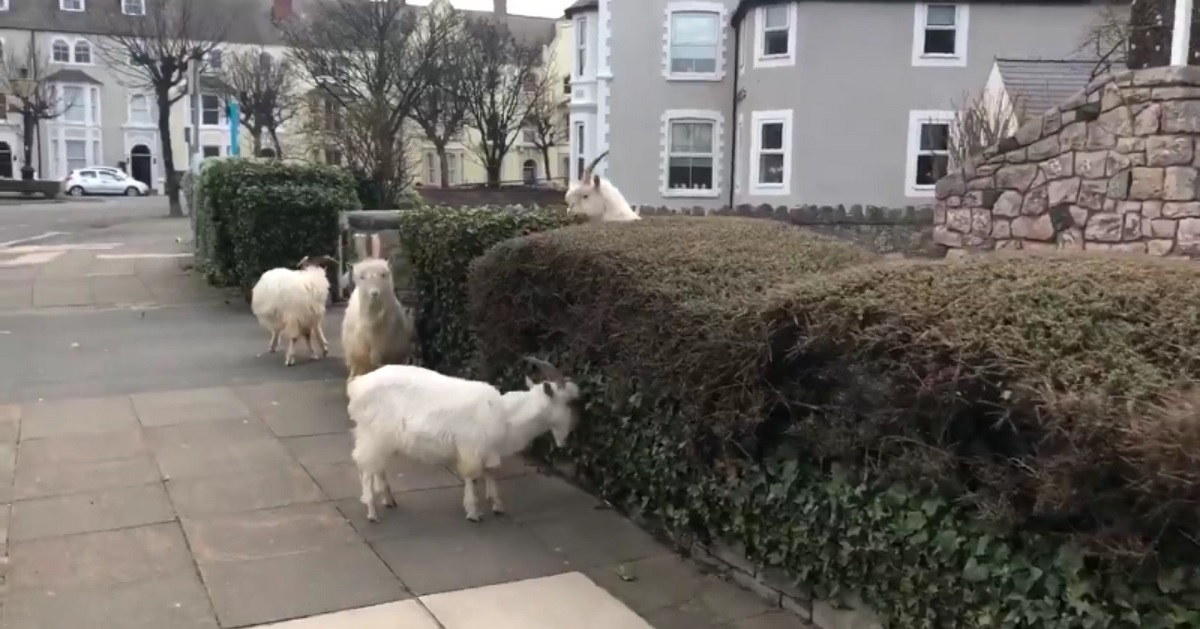 Manchester Evening News journalist Andrew Stuart called the cops on some goats who had taken over a town in Wales during the coronavirus lockdown, but the goats weren’t about to let the fuzz dissuade them from their opportunistic foray.

A group of goats is called a “trip,” and one such gathering lived up to that name this week when Stuart, a videographer, spotted them from inside a pub in the township of Llandudno in Wales, and sprang into action.

Stuart documented the ordeal on Twitter, where he posted video and wrote “I think I just got a group of goats in Llandudno arrested.”

I think I just got a group of goats in Llandudno arrested.

Let me explain… first, I saw this from inside a dark pub (the one I live in currently). I thought I was seeing things. So I took some video: pic.twitter.com/RtxYG6htLC

Stuart, a professional videographer, continued to film in portrait mode as the goats grazed the empty streets.

So I decided to see what was going on. They stopped on Trinity Square, and decided the hedges there looked very tasty (tbf, they probably are if you’re a goat ?) pic.twitter.com/Sz7WnoQGsd

Eventually, Stuart got the aspect ratio right, and scolded some of the goats for failing to maintain proper social distancing.

They weren’t moving from their midnight feast. And they were probably going to run riot on the town, what with nobody being about due to the lockdown. I also wasn’t sure if they were keeping the required 2m apart. pic.twitter.com/Yn69JWDV8p

That’s when Stuart decided to become part of the story, and call the cops on the goats.

So I gave @NWPolice a call to tell them a load of kids (geddit?) were running riot (I didn’t actually say that… sadly). They said they’d pass it on to officers. pic.twitter.com/k1q28cfUi4

And they sent a patrol car down who turned on the big red lights. So, I’m sorry if the goats got arrested. But they were being very naughty.

Also, close the gates behind you on the Orme.

And stay 2m apart at all times.

But the goats came back the next morning, more determined than ever.

Goat update: they’re back, and they’re gathering in groups of more than 2 ? pic.twitter.com/Bc2N42SPGo

The extraordinary social distancing measures being taken around the world have led to several changes to the natural order, including the reemergence of dolphins and swans in Italy and some puppies who took over the Georgia Aquarium. Nobody called the police on those critters.