Feud Erupts After ABC’s Matthew Dowd Lumps Megyn Kelly in With Matt Lauer: Why Can’t They Just ‘Fade Away’? 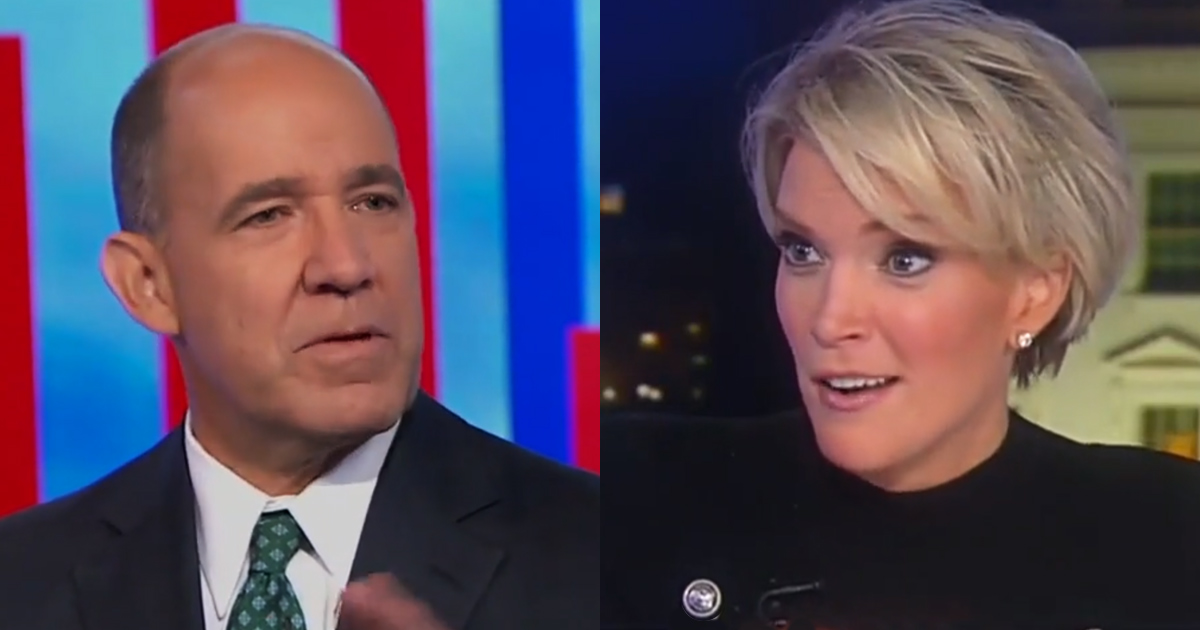 He made the comment by way of a now-deleted tweet, to which Kelly responded. In the back-and-forth the ABC analyst initially doubled down, but eventually as the conversation wore on, and negative responses from all over piled up, Dowd deleted the tweet and expressed a degree of regret. 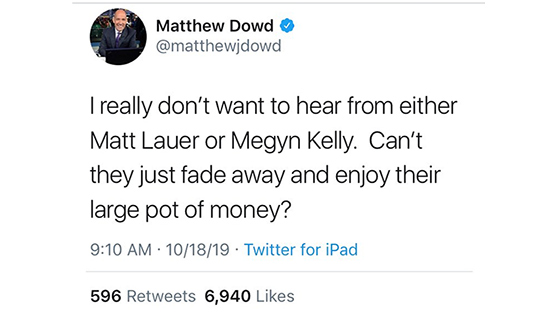 The initial tweet was sent Friday morning, but the controversy erupted after he and Kelly went back forth when Kelly responded forcefully on Saturday morning.

Yes, I could just sit back and “enjoy my money,” @matthewjdowd, but instead I’ve chosen to speak up for women being harassed and abused who have been muzzled by NDAs. Sorry you find that so annoying. https://t.co/Fy86s5QTsF

Megyn, i am all for that, and if you read my feed you would know that. However, did you stand up for Christine Blasey Ford, Anita Hill, and all the accusers of President Trump? Also, i know you are blasting NBC, but i don’t see you saying much about Fox.

.@matthewjdowd – umm, there is a whole movie about me standing up for the women at Fox. & I put Trump accusers on the air. Also my job as a reporter was not to “stand up” for Blasey-Ford. It was to report fairly on her w/o taking a side. You should try it sometime. https://t.co/lLnOCSrm0I

Megyn, i wish you well. I would put my objectivity up against yours any day of the week. You worked at Fox News.

By the way, I devoted an entire chapter of my book to the harassment scandal at Fox and discussed it on virtually every network. It was a NYT #1 Best Seller. You should read it! #settleformore https://t.co/lLnOCSrm0I

I think the words you’re looking for are “I’m sorry, I was wrong.” Apology accepted! https://t.co/6YOOrDXqFo

@megynkelly I deleted the original tweet. No matter how right I feel, it is not the loving way I want to be in this world. We have enough meanness and coarseness in the world today, I strive to do better each day. I do wish you well and hope we can heal instead of hurt.

While it is presented as conciliatory, Dowd did not retract his accusations or his equating Kelly with Lauer, but only expressed his regret over the tone and manner in which those accusations were presented. Nevertheless, Kelly cleared the air with him.

I am all for less meanness in the world. We’re good @matthewjdowd. https://t.co/ovF9XLyEo9

For which he thanked her.

Onward. Thank you for that.

The original, now-deleted Tweet included his comment as well as a share relating to Kelly discussing NBC and Matt Lauer with Tucker Carlson and her call for NBC to release Lauer’s accusers from non-disclosure agreements.

The beef between the two generated a great deal of reaction on Twitter, including among other verified accounts (notably Fox’s Janice Dean), some of which continued well after the two had resolved the disagreement.

Yikes this was a bad idea

You would lose. The end.

I’m standing and applauding at my phone, @megynkelly ! Slam dunk on the coward @matthewjdowd sub tweeting to tell a successful woman to stop working and be quiet. #MeToo pic.twitter.com/bJNpA2XRJH

People like Matthew Dowd fail to realize that Megyn Kelly was one of the first people who essentially got CANCELED by the right for confronting Trump in that first GOP debate in 2016 and also for speaking out against Roger Ailes for sexual harassment. pic.twitter.com/Q6dDg6f0I5

When @matthewjdowd tries to set the rules for what @megynkelly is allowed to talk about. pic.twitter.com/r0QBYLeeoi