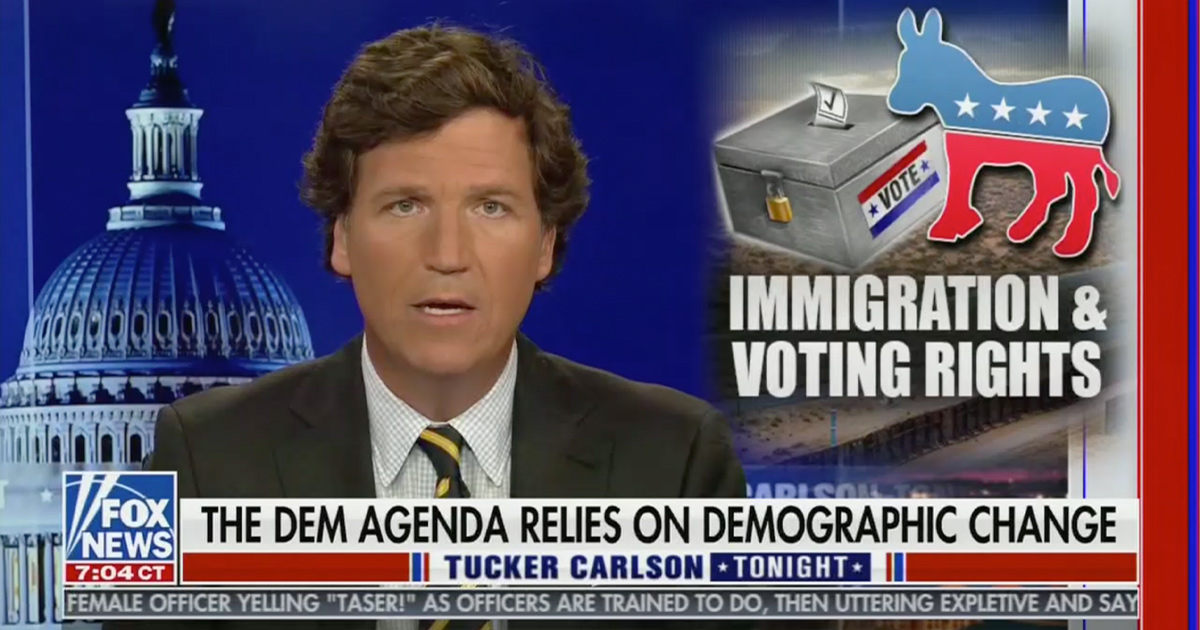 A group of Orthodox Jewish rabbis has sent a letter to the Anti-Defamation League criticizing the ADL for its demand that Fox News fire opinion host Tucker Carlson after he appeared to embrace the racist and antisemitic “replacement theory” in an on-air segment last week, according to a story in the Jerusalem Post.

“The Coalition for Jewish Values, which represents over 1,500 traditional, observant rabbis in American public policy, is distressed by grossly misplaced charges of antisemitism made by your organization,” the letter, addressed to ADL CEO Jonathan Greenblatt, said. “Your recent attack on Tucker Carlson of Fox News, calling it ‘white supremacist’ to question whether particular policy choices enable illegal immigrants to nullify the votes of American citizens, is merely one example.”

The CJV, which launched during the administration of former President Donald Trump, also accuses the ADL of becoming “markedly partisan” under Greenblatt’s leadership, claiming an ADL study focused too much on “obscure neo-Nazis of the ‘alt right,’ yet says nothing regarding far more dangerous, leftist adherents of radical Islam.” The group does not provide specific examples of how “leftist adherents of radical Islam” have been “far more dangerous” to Jewish people in America.

The CJV is itself, arguably, a partisan group, having aligned with far-right and right-wing groups against the Equality Act, which would ban discrimination on the basis of sex, sexual orientation, and gender identity in public facilities. It also defended Trump against criticism from Jewish organizations, and has said that the administration of President Joe Biden is “funding terrorism” in the Middle East.

This flurry of open letters started on April 9, when Greenblatt penned one to Fox News CEO Suzanne Scott about Carlson’s comments on April 8, in which Carlson appeared to embrace the “replacement theory” that has served as the basis for massacres by far-right extremists.

Days later, Fox Corporation CEO and executive chairman Lachlan Murdoch sent a letter to the ADL defending Carlson, saying that the host “decried and rejected replacement theory” by reframing it as a voting rights issue. Murdoch also reminded Greenblatt that the ADL has previously honored Rupert Murdoch with an award for fighting antisemitism: “I remember fondly the ADL honoring my father with your International Leadership Award, and we continue to support your mission.”

In his reply to Murdoch, Greenblatt said Carlson merely saying that he wasn’t endorsing the replacement theory didn’t make it true, and added that although the “ADL honored your father over a decade ago, but let me be clear that we would not do so today, and it does not absolve you, him, the network, or its board from the moral failure of not taking action against Mr. Carlson.”

According to a story in The Times of Israel on Wednesday, Abe Foxman, the former longtime director of the ADL, stood by the award to the elder Murdoch, and said he’d do it again.

“I’m proud that I gave it to him then and I would give it to him again today,” Foxman told the Jewish Telegraphic Agency, according to the report.

Although a precise definition or explanation of the replacement theory is elusive, the modern understanding of it can be traced to French writer Renaud Camus, who argued that France, and Western countries generally, are facing a “replacement of a people … by one or others; of its culture by the loss of its cultural identity through multiculturalism. The idea incorporates anti-immigration sentiment, a fear of low birth rates among white people, and general xenophobia into one overarching conspiracy theory that a dominant group will be replaced, or nullified, by another group.

In a discussion about immigration with Fox News Primetime guest host Mark Steyn on April 8, Carlson said this:

I’m laughing because this is one of about 10 stories that I know you have covered where the government shows preference to people who have shown absolute contempt for our customs, our laws, our system itself, and they are being treated better than American citizens. Now, I know that the left and all the little gatekeepers on Twitter become literally hysterical if you use the term ‘replacement,’ if you suggest that the Democratic Party is trying to replace the current electorate, the voters now casting ballots, with new people, more obedient voters from the Third World. But they become hysterical because that’s what’s happening actually. Let’s just say it: That’s true… If you change the population, you dilute the political power of the people who live there. So every time they import a new voter, I become disenfranchised as a current voter. So I don’t understand what we don’t understand cause, I mean, everyone wants to make a racial issue out of it. Oh, you know, the white replacement theory? No no, this is a voting rights question. I have less political power because they’re importing a brand-new electorate. Why should I sit back and take that?

In addition to the ADL, both The Daily Show and a former aide for George W. Bush publicly criticized Carlson’s comments. Carlson subsequently doubled down, mocking the criticism he received, and continuing to sound the alarm about “demographic change.”

The ADL did not return Mediaite’s request for comment on the rabbis’ letter.