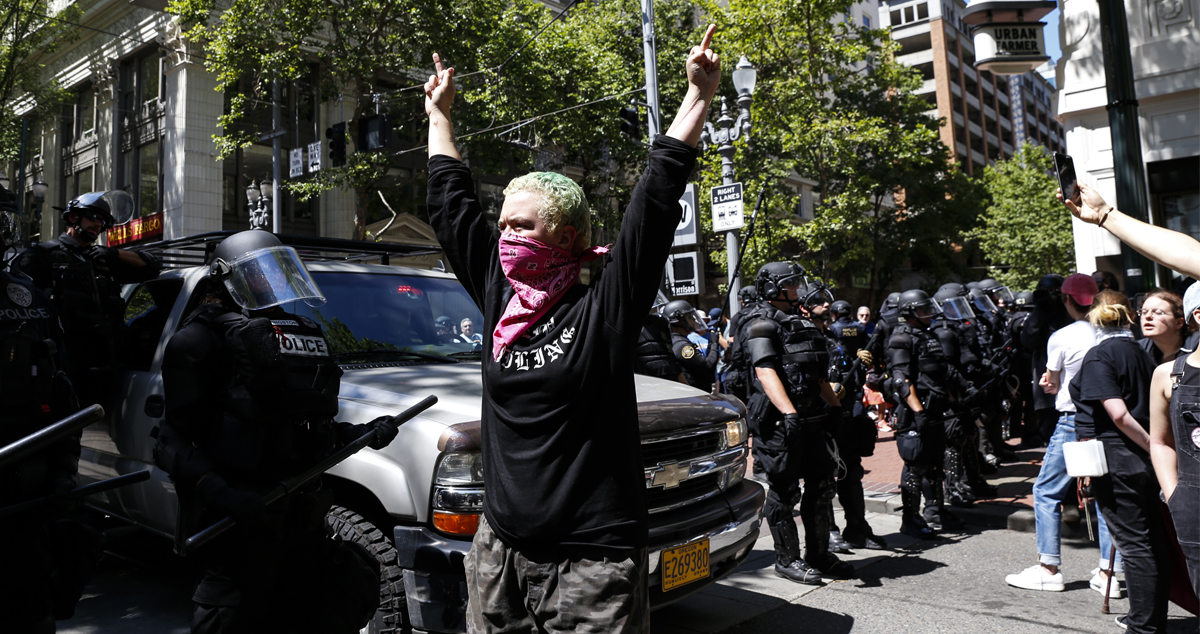 An unidentified Rose City Antifa member flicks off to the police during a demonstration between the left and right at Pioneer Courthouse Square on June 29, 2019 in Portland, Oregon.

On Friday night, Patriot Prayer leader and Proud Boys member Joey Gibson was arrested on rioting charges resulting from a clash between the alt-right groups and the far-left group Antifa in the city of Portland back in May. Gibson urged his followers to turn out “one hundred-fold” on Saturday for another set of demonstrations being held there by those and other alt-right and white supremacist orgs, and the city is bracing for more conflict.

News of the pending demonstrations was featured several times on Fox & Friends on Saturday morning. The right-wing rally is, according to one of its organizers, specifically a protest against the “domestic terrorism” of Antifa. Antifa has been involved in dozens of such conflicts and violence, and frequently hold demonstrations in the city that shut down streets and result in clashes with police or counter-protesters.

Not long after the Fox segment, President Trump tweeted about the rally, intimating his concern that the police need to keep their eye on Antifa, which he said may soon be labeled an “ORGANIZATION OF TERROR”.

Major consideration is being given to naming ANTIFA an “ORGANIZATION OF TERROR.” Portland is being watched very closely. Hopefully the Mayor will be able to properly do his job!

Just a few weeks ago, clashes between these ideologically opposed extremist groups resulted in a great deal of violence, including a high-profile attack on photojournalist Andy Ngo.

Portland Mayor Ted Wheeler appeared on Fox’s Outnumbered: Overtime on Friday, telling host Harris Faulkner that he is “confident that from a law enforcement perspective, we’re going to have all the tools and the resources and personnel we need.”

The AP, the New York Post, and other publications have reported that the right wing demonstration on Saturday is organized by the “Proud Boys”, and will also include skinhead group the American Guard, “militia” groups the Three Percenters and the Oathkeepers, and even the neo-Nazi Daily Stormers.

Neither Fox & Friends nor President Trump expressed their concerns over that aspect of Saturday’s events.