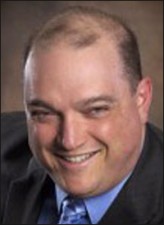 Captain Ed Morrissey is one of the most influential conservative bloggers in America, writing for Michelle Malkin-founded Hot Air. You can check out his impressive resume on the Wikipedia, but I’d rather tell you about my personal experience with Ed.

I was toiling away at AOL’s Political Machine, trying to make a name for myself, when I first encountered Ed’s old blog, “Captain’s Quarters.” As I was taking apart whatever argument Ed was making, I took notice of the fact that he, like me, was a Star Trek fan, and hence also a human being. Humanity is something that sometimes gets lost in our political discourse. (I also predicted, with Carnac-ian accuracy, the answer to one of today’s questions)

Several months later, I found out that Ed was a daily reader of mine, and we began to correspond occasionally. His generosity about my writing was an important validation for me. I had occasion to meet him at CPAC this year, and that meeting cemented a valuable friendship.

As a blogger, Ed’s opinions and analyses tend toward the extremely reasonable. He doesn’t jump on every right-wing meme that comes along, which makes the battles he does choose that much more resonant.

As a human being, I would be hard-pressed to name a more decent, generous, good-hearted person than Ed Morrissey. This is one area in which Keith Olbermann and I completely agree.

I get them from e-mails and from my feedreader. I usually go through my favorite blogs first, then skim newspaper and wire service feeds. It takes me a while to do it, so I get up pretty early and get a head start.

Arugula or swiss chard?
Probably neither. I’ll pick the chard just because it looks better, but I’m really an iceberg lettuce man.

Again, neither. You need to get out more.

Abba or Ace of Base?

Abba! AoB was good, but the original was the best.

The Simpsons or Family Guy?

Simpsons, although I haven’t watched it in years. Never liked “Family Guy”.

I prefer to think of myself as a pan-Trek guy. TOS was my first Trek love, however.

Last week, it would be ACORN. This year, I think they’re missing the massive disillusionment with Obama and the Democrats. The most recent Gallup poll shows an big backlash against their big-government agenda, and a sharp increase in people who think government is trying to do too much. That’s what feeds the Tea Party movement, which has been poorly reported.

I’m a big fan of journalism. I’m a news junkie, which is why my career is so exciting for me. It marries my passions for writing, news, and politics. I’m concerned that the collapsing business model for newspapers will not evolve into something stronger that allows them to survive, which means a lot less local news in the short term, and a narrowed set of options for national and international news. I’m excited that so many more platforms for journalism have arisen over the last 15 years or so, which means more opportunity, more variety and diversity, and eventually better quality. No three broadcast networks or four or five newspapers own the news any longer, and that’s better for everyone. 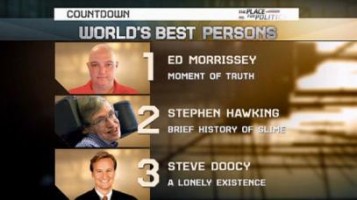