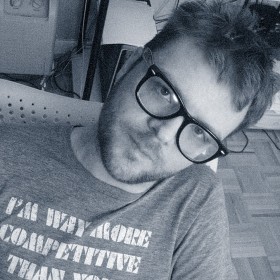 Rex Sorgatz is many things: Writer, editor, blogger, developer, consultant, authority on microcelebrity, wearer of exotic t-shirts, former web TV show Svengali, proud dog owner and surely one of the biggest consumers of media I’ve ever met (and don’t call him Shirley — though you can call him Fimoculous, online, if you’re referencing the blog he’s run for nigh on a decade now or his Twitter or Tumblr or Flickr). He’s also part of the Mediaite team as our designer/developer and can frequently be spotted around our office, enough to have stolen the Mayorship of Downtown Records from me on FourSquare, but we’ll see how long that lasts. If there’s a word to describe Sorgatz it’s prolific, or maybe polymath — having spent a fair bit of time with him (disclosure!), I can attest to the breadth of his expertise about music, TV, film, books, media, new media, and What The Kids Are Talking About (I am pretty sure he is a leading authority on Boxxy). So it makes sense, then, that he should be the self-appointed curator of all those year-end lists that run through the very best, most interesting, or insert-quirky-descriptor-here lists that are the media staples come December of any given year. Sorgatz’s “List of Lists” every year is massive and meta, a great overview of the minutiae of the last 365 days as well as a document shedding light on how we collect, organize, prioritize and present information. There’s a lot going on under that spiky hairdo, so as we look back on 2009 he seemed like the perfect person to wrangle for our 5QQ – Five Quick Questions.

A media knowledge elixir is slowly filtrated into my skull by nanobots while I slumber.

Actually, I’m really into the BNO Breaking News iPhone app lately. It breaks news faster than every source, and it delivers headlines in digestible Twitter morsels. Plus, it makes a CRAZY LOUD ALERT SOUND that wakes me up every morning, because naturally I sleep on my iPhone.

For everything else, I have 600 feeds in my RSS reader that eat away at my soul. (Knowledge isn’t power; it’s cancer.)

But seriously: Isn’t it interesting that Tumblr and FourSquare are NYC’s major contributions to social software in the past couple years? I have a theory! They share this commonality: they’re both semi-closed networks. To wit: Though wildly successful, both platforms still somehow feel clubby and insidery.

In the long run, it will be interesting to see if this distinct (dare I say New Yorky?) quality is a feature or a bug.

(Before I lived in NYC, I had a name for social software like FourSquare’s predecessor, Dodgeball. I called it “NewYorkWare” because those apps seemed specifically made for the hyper-urban. Similarly, Tumblr seems made for the hyper-mediated.)

GG lost me this season. There are only so many ways to slip “I am Chuck Bass” into dialogue. Critics picked up on Fringe this year, but last was better.

The best show on TV right now is Modern Family. It’s sorta genius to mash up the crass family comedy from the late ’80s (Married With Children, Roseanne) with the jittery faux-docudrama of the middle ’00s (Arrested Development, The Office), and then in a twist, give it a heart.

I was at Chuck’s wedding this summer and it sorta made me cry. I hate that, so I’ll pick Heffernan.

But it’s odd that you are making me choose between two columnists who currently don’t write a column!

Mad Men or The Hills?

I have an essay in a reality TV collection coming out in March that goes to bat for The Hills. People often say they hate The Hills because it’s fake, but I argue this is precisely what makes the show so interesting. This question “Is it fake?” is precisely the question we ask ourselves all day, whether while reading Wikipedia or trying to determine if an image has been Photoshopped. Interrogating truthiness, as Colbert called it, is what makes the act of watching The Hills so interesting: it embodies the idea of questioning facticity like nothing else in culture.

Interestingly, this also seems to be the primary dilemma of Mad Men.

3. What’s the biggest story the media has missed this year?:

1) The death of Michael Jackson.

If you have an office between SoHo and Flatiron, it’s de rigeur to say excited; anything above that, nervous.

I spend most of my day floating around between the two, so I’ll say pensive.

Briefly: There is more information available right now than there ever has been, and more people are involved in content generation than ever before. Despite the caterwauling you hear from the cranks, this is cause for celebration. However, a signal-to-noise problem persists, and “quality” is still the bugbear of the free content economy.

All in all, I feel less worried about waking up in the morning and not knowing something valuable than I did 15 years ago. So for me, the glass is half full of Jameson.

Bonus question: How many lists do you have so far?

Nearly 400, but I was hoping to close the year at 700. So I say to you internet taste makers and media list producers: get to work!

Check out Rex’s year-end List of Lists here, and Fimoculous for all sorts of other goodies.