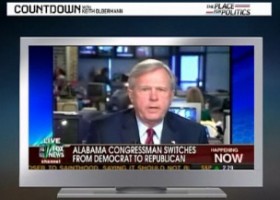 Lawrence O’Donnell was subbing for Countdown host Keith Olbermann last night, and dedicated part of the program to Alabama freshman congressman Parker Griffith, who announced on Tuesday that he was leaving the Democrats to join House Republicans. Not only did O’Donnell take shots at the GOP’s inclusion of “that dwindling category of Republican, the moderate Republican,” he posited the real reason behind Griffith’s party switch: to get booked on Fox News.

Transcript of the segment:

O’Donnell: After 12 months in congress, Alabama freshman congressman Parker Griffith announced yesterday morning that he was leaving the Democrats to join House Republicans. The move was reportedly in the works for some time, though it came as a surprise to Alabama Democratic party chair Joe Turnham who called Griffith “one of the most liberal people I have known.” Just like the failed moderate Republican Dede Scozzafava In New York, Griffith earned RNC chair Michael Steele’s stamp of approval, probably a temporary stamp. As to the reasons for the defection, Griffith today realized one of the fringe benefits of being a Republican, getting booked on Fox News.

Griffith: I have found that the far left tilt of the Democratic Party no longer welcomed me or my ideas and so I made the decision.

O’Donnell: Of course Griffith immediately slots into that dwindling category of Republican, the moderate Republican. The category that so many in the GOP are trying to purge. Erick Erickson, of the blog Red State, spoke for the conservative fringe yesterday, writing quote, “Griffith was an extremely endangered Democrat, we should now hope him to be an extremely endangered Republican in a primary. We can pick this guy off and get a real Republican in that seat.”