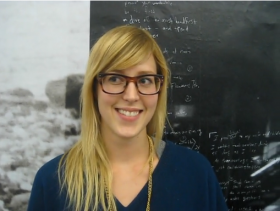 Verena von Pfetten is Air America’s Senior Lifestyle & Entertainment Editor, and the former Living Editor at the Huffington Post, which makes her my former colleague and great friend. (She is also Canadian, as well as the former Verena van der Woodsen to my Blair Sklardorf). Verena had the good fortune, or misfortune, depending on how you look at it, to run into me at a moment of inspiration, during which I suggested we experiment with a new form of our traditional 5QQ — the impromptu video. Verena gamely gave it a whirl, and what followed was about as informal and off-the-cuff a rendering of the 5QQ as we have ever done (usually we email the questions to our quarry, who then have time to think about the answers. Not so today with Verena. Lucky her!).

Still I rather like this form because it allows for instant, from-the-gut responses — like her instant response to my question of who she preferred, Diane Sawyer or Katie Couric. Her instant choice of Sawyer reflects, I think, what Q ratings tell us is true, anyway: people have instinctive, visceral reactions to their TV pals (witness V’s flip answer – Sawyer, because she “likes blondes”), and tapping into that is never, ever a science (says this brunette). But even more interesting was Verena’s final answer, about whether she is nervous or excited about the future of media. “Excited, because I don’t know the past,” said this twenty-something editor whose professional life has occurred entirely on the Internet. Just an interesting reminder that there a whole new generation coming into this profession for whom, say, Charlie Gibson‘s final sign-off as anchor meant little. The world is changing, folks — and these are the people who are slowly but surely taking over, so pay attention to what they like, what they notice, and how they make decisions.

Also impressive: Verena’s answer to the Twitter question was well within the 140-character limit. By the way, the off-camera voice you hear piping up is Glynnis MacNicol, who joined me for a few days in sharing a crash-pad in Denver with Verena for the 2008 Democratic Convention. I remember her explaining to me that this young adult book series about vampires was going to be the next big thing. Indeed. She shares more gems below — hope you enjoy meeting her via our first-ever video 5QQ – Five Quick Questions.