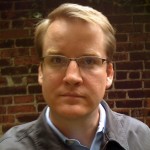 Then living in California, I woke up eight years ago to the already-burning Twin Towers – a moment that would have seemed dream-like had it not been instantaneously jarring. A friend noted that only on noticing that the windows near his TV had grown dark did he have any indicator of how long he’d been watching the news.

Like a growing number of others in a time obsessively concerned with the “digital divide”, I went to my desktop computer to get more information. Unlike many others, though, I made screen captures of the sites as I visited them.

In retrospect, I’m not sure why I did this. It may have been the same instinct that led me to collect as many copies of newspapers about the events as I could. Or it may have been the recognition that the information on the sites was temporary and would be lost in a moment’s time as HTML or ASP pages were updated. As it was, I snagged about 15 captures of various sites between 12:15 and 3:30 pm Eastern. Eventually these were added to a larger repository of similar screen captures that is still online.

Even outside of the context of the events of the day, the captures are time capsules. A Mac guy, I notice today the cumbersome Internet Explorer 5 browser, the bookmarks bar I created that includes cryptic folders for “mine” and “humor”. I’m reminded that I was a premium member of Salon; that websites then were just starting to follow a more dynamic, blog-like format. 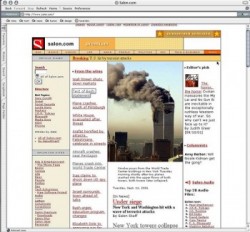 The sites themselves, of course, are noticeably doddering – like the unfamiliar cursives of the elderly. Salon, for example, used an odd mix of typefaces, on a text-heavy, cramped design. Slashdot was a jumbled mess of serifs and tables. The traffic-crippled New York Times was almost entirely graphic-free. Perhaps most striking are the sites for the impacted airlines, United and American – each stripped bare to simple text messages confirming the loss of their planes. If a website can look dazed, these sites do.

I discovered in time that my captures (and those of others in the archive they eventually joined) weren’t the only record of the day. The always surprisingly comprehensive archive.org (home of the original Wayback Machine) assembled regular 9/11 updates as the day progressed. It is also now home to the astonishing, minute-by-minute September 11th television archive, allowing visitors to watch the feeds of any of the major networks from that day.

9/11 was, of course, the first of the major JFK-Challenger-Pearl Harbor-style crises to occur in the internet age, meaning that it has an electronic trail unprecedented in history. It is the first tragic moment in history (of hopefully only very few) that transpired on a relatively mature internet which distributed what information it could as rapidly as possible. Snopes might have frowned on what we were reading, but the internet was still pivotal in assuring that we understood what was happening. It was, perhaps, a key moment in the transition from television’s dominance to the supremacy of the web.

The web now fully embraces history, including, today, the history of the astonishing events of eight years ago. The Times, for example, provides an exceptional look at amateur footage and photos of the day. Had the tragedy occurred today, those recordings would be on YouTube and Flickr within minutes, bandwidth-providing. Better eight years late than never.

I’ve made the point to people in the past that our descendants will see our era as one emerging from a type of Dark Age – from this point forward, no incident, however small, will be undocumented, unrecorded, or un-photographed. September 11th was the first truly momentous event of this new era, allowing us to look back with an unprecedented clarity. Which, on a personal note, allows me through my screen captures to remember what that day was like – sitting at my computer waiting for CNN to load whatever images it could, reading terse, telegram-like statements that connected me to the rest of the reeling world.

Philip Bump is a technology and communications consultant in New York City who will be writing an occasional column for Mediaite about the intersection of history and the Internet called “The Wayback Machine” (inspiration here). Follow him on Twitter here.