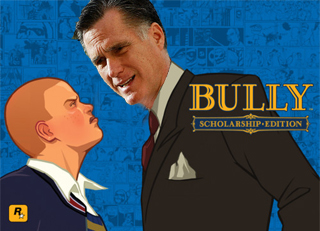 Somehow today, Mitt Romney has found himself in the most 2012 political scandal ever after The Washington Post published a report accusing him of being an anti-gay bully while going to his elite private high school. Heck, the only thing that could have made this story more perfect is if he had hassled gay kids while stealing poor women’s birth control. The GOP candidate responded by telling reporters he “did some dumb things” back then, he now apologizes, and, if it helps, he doesn’t believe he “thought the fellow was homosexual.” Now, ABC News is reporting that another classmate of Romney’s is accusing him of “lying.”

One fellow classmate of Romney’s at Cranbrook says he believes Romney is lying when he says he doesn’t remember the Lauber incident.

That looks pretty bad, right? But you know what, whoever this classmate is, he’d never have gotten to say that if Romney had NEVER RESPONDED IN THE FIRST PLACE.

Here at Mediaite headquarters, we all assumed this story would pretty much just go away. Like I said in my post this morning, this is the story of something Romney allegedly did 50 years ago. Youthful indiscretions don’t ruin a campaign. Hell, if you don’t believe me, please have a conversation with Dubya’s liver or Barry’s nostril. You’d think that Romney could just call this story silly and politically motivated and the whole thing would be relegated to late night monologue jokes within a week.

But that’s not what he’s doing. First he “apologizes” for something he says he can’t remember and now his camp is doing this:

What? How is that going to be good at all?

Can you imagine the best case scenario here? Romney’s going to pull out some other classmate, presumably some ultra rich guy, who’s going to suddenly go on TV and talk about how his old chum Mittens was just the best. It’ll look awful.

Unless the Romney campaign knows that this story is going to get worse, I just can’t understand why they’re responding to it at all.

Oh, well. I’m just a blogger and not a campaign manager. Still, I know that if anyone starts telling people about the crap I did in high school, I’d just call them a liar and change the subject.