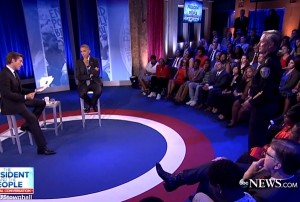 On Thursday night, ABC News aired a town hall event with President Obama (one which had been taped prior to the attack in Nice that killed at least 80 people) that was billed as a “national conversation” on race and policing, and even by the low standards evoked by that mission, the special was, in my view, a nearly total failure, for reasons too numerous to name. The enterprise was pretty hopeless from the start, since the President has to thread an impossible needle where race and policing is concerned anyway, but it wound up being so much worse than it had to be.

For a start, there was ABC’s inexplicable decision to allow Republican Texas Lt. Governor Dan Patrick to use the town hall as a forum to smear the President to his face as anti-cop, while also making the absurd grandstanding request that he bathe the White House in blue light as a memorial to the police officers slain in the Dallas ambush:

Now, the President handled Patrick as best he could with one hand tied behind his back, but Patrick’s attack was pure crap. He misquoted the President, and drew a despicably dishonest comparison between a gesture that was done in celebration of marriage equality and something that would have been redundant and inappropriate. When people die, we fly flags at half-staff and hold solemn memorials, we don’t think up jazzy decorating tips.

Whatever possessed ABC to invite Patrick was the same instinct that led them to try and keep things even-Steven throughout, by having a white news anchor moderate the discussion, for example, or to have the mother of Walter Scott‘s killer, Officer Michael Slager, stand up and be recognized, but thankfully not get a question in. It’s the same instinct that led them to freeze out Erica Garner, whose father Eric Garner was killed by police two years ago that night, but to squeeze in a question from the mother of a Baltimore cop who got glass in his eye during the unrest over the Freddy Gray killing. It was the same instinct that led to “conversations” about training, but, and I’m not even kidding you, featured a training video to teach black people how not to get shot when they get pulled over:

David Muir asked one of the few decent questions of the night there, but then never even attempted to answer it: why the eff should any citizen have to take a training course on how to survive a traffic stop? Instead, the President was asked if he’d ever been pulled over, and while he mentioned the existence of traffic stops in which he was not treated well, President Obama of course changed the subject, because how could he possibly tell a story about an imperfect cop without ending up hosting six million beer summits the next day?

But the biggest problem with the special, if not the most offensive, is best illustrated by what was also probably the best thing about it. Milwaukee Police Chief Ed Flynn, who has said some pretty terrible things in the past, gave a surprisingly enlightened and plain-spoken assessment of the tensions between people of color and urban police forces, including a defense of Black Lives Matter and a recognition of the sources of community mistrust, although I’d hardly call last week “historical,” but then finished it off by accidentally exposing the whole problem with this show and every political and media response to this issue:

After delivering that tough, real-talk description of the problem, Flynn asks President Obama to… continue the conversation. I didn’t count, but I’m betting the word “conversation” would dominate a word cloud of this event, because it was one of only three things even approaching a “solution” to the problem that were mentioned at all, the others being “resources” and “training.” We all know that “resources” means money, which we ain’t gonna get and won’t help anyway, and training is something they’ve been yammering about since Hillary Clinton was First Lady, and neither of those things will solve a damn thing, or even do as much as the useless, endless “conversation,” without the one thing that was missing.

It’s the same thing that’s been missing even from the ambitious reforms proposed by Hillary Clinton and Bernie Sanders, which is this: laws and policies that hold police accountable. This is not complicated. All the conversations about race and training initiatives and task forces won’t do a bit of good until we enact true accountability in the form of three policies: Mandatory body cameras, federalized investigation and prosecution of all use of force cases, and mandatory reporting of profiling data. Everything else can be worked around. You can get good training and stay panicky or racist. But if your panicky racist ass ends up on video and getting investigated by someone who isn’t your buddy, you’re going to stop, one way or the other. Training wouldn’t have saved Walter Scott or Eric Garner, cops who didn’t have a total sense of impunity would have.

We need leaders and media figures who are not afraid to explain that accountability isn’t anti-cop, it is pro-citizen and pro-good cop. We need to stop the conversation and start to act.