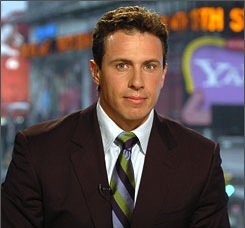 As the Great Mosque Debate of 2010 rolls into what feels like its billionth week, it’s clear that tensions are rising steadily higher. With all of the televised shouting matches and roadside stabbings out there, it’s not at all surprising that discourse on the internet, the official home of unbridled rage, has gotten pretty bad. How bad? Well, a respected journalist is apparently organizing brawls outside of ABC’s New York headquarters.

Earlier today, Chris Cuomo implored his followers on Twitter to remember the violence committed during the Crusades before they condemn all Muslims for the actions of some extremists: 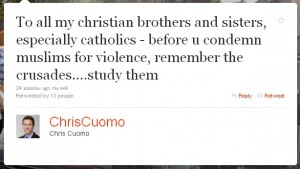 Not that inflammatory a thing to say, right? Well, maybe during any other summer it wouldn’t be but right now, when people apparently have to declare and defend their faiths like radio callers talking up their favorite baseball teams, this was a booboo. NewsBusters picked up the story and soon Cuomo was getting the full brunt of the e-torch wielding e-mob. A few hours later, Cuomo tweeted a slightly less rational message: 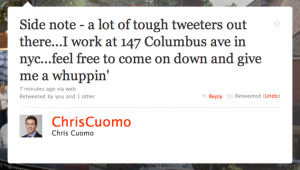 Oh, gosh, remember the beautiful days before we all hated each other. Those were nice.

Anyway, for any of you Tweeters out there who plan on lacing up and heading to ABC headquarters, you should probably skip it. I used to work in that building and they’ve got a crack security team. Besides, if you wanted to fight anyone, you should take out those blood-thirsty paparazzo clogging up the street outside of the Regis and Kelly set. Now those guys deserve a whuppin’.