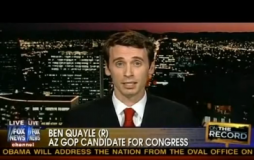 If Ben Quayle‘s intention when he called President Obama the ‘worst president in history‘ was to gin up enough attention to push him into the lead of the large GOP pack running for Congress in his Arizona district, than mission accomplished! Quayle won the primary on Tuesday with 22% of the vote.

Along with that win, however, is coming some less than ideal attention. Quayle appeared on Greta Van Susteren‘s show last night to talk about his win, and Greta subsequently asked him about his ‘Brock Landers‘ history on the DirtyScottsdale.com: “What is this Dirty.com? Explain to me, did you post there? And did you post the stuff that people say you posted there?”

Answered Quayle: “I’ve had nothing to do with that website you’ve just talked about. This is about a few post, satirical and fictional posts that were put out on a blog that doesn’t even exist anymore…and it’s been run through the wringer.”

If nothing else Quayle has mastered the political art of not saying your opponent’s name, be that opponent a website or a person. Also, he says he’s never been degrading to women and that the unfortunate fallout from this whole debacle is that a truly distasteful website is getting a lot of traffic. In Quayle’s defense, he appears to merely be the first in what will inevitably will be a long line of politicians who have a history on the Internet. And as Internet histories go, his appears to be rather tame. Watch below.