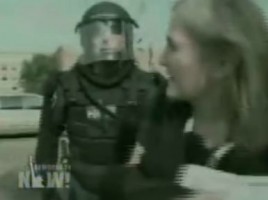 What a strange, disquieting story: Activist journalist and author Amy Goodman, longtime host of the popular public radio show “Democracy Now,” was detained for 90 minutes at the Canadian border while crossing from Seattle to Vancouver, where she was to speak for her new book. According to Goodman, border guards pulled her and her two colleagues aside and questioned extensively about the speech she intended to give — specifically, about whether she was planning to talk about the Olympics. Huh?

That would be the 2010 Winter Olympics to be held in Vancouver, and about which there has been much discord and unrest in Vancouver. Apparently, according to Goodman, the guards were very interested in her thoughts on the matter. Despite answering all their questions, including providing them with a copy of her book, on which her talk was based, she says the border officials searched their car, including going through two laptops owned by her colleagues. Wow. (That said, according to U.S. Dept of State, computers may be searched without a warrant, and entry is solely determined by the Canadian border control. See here. But still). They were eventually allowed through — an hour late for the speech — which was reportedly delivered to a standing-room-only crowd. Oh, and now it’s a national story in Canada.

Why Goodman? Well, she speaks up loudly, that’s for sure. Her latest book, Breaking The Sound Barrier, is described on the Democracy Now site like so: “Amy Goodman breaks through the corporate media’s lies, sound-bites, and silence.” She was also arrested at the 2008 Republican National Convention in St. Paul, for the apparently lawless act of inquiring after her other colleagues who had been arrested. All of them were duly credentialed for the convention. The video of Gooman’s arrest blew up on YouTube, shocking as it was to see her manhandled and cuffed by an officer with a billy club. One can hardly hold that against her, however; so it’s odd to imagine what triggered the border guards — unless her reputation, or name on some list, preceded her.

Here’s Goodman’s interview with the CBC about the incident:


As confused as Goodman was by the guards’ line of questioning, her audience at the Vancouver Public Library clearly were not: When it was announced that Goodman had been detained at the border and the reason was about to be announced, someone shouted out “The Olympics!” Muttering ensued. The Olympics have been the source of all sorts of protest and controversy in Vancouver and British Columbia for a while now, especially after the global economic meltdown scuttled all plans for turning any type of profit. The Olympic Village, occupying some choice waterfront land, is looking unlikely to be snapped up afterward for luxury condos; the Vancouver Olympic Committee (VANOC) stirred up resentment when they used lines from Canada’s nation anthem — and then trademarked them; and there have been a whole host of protests, controversies and issues that have roiled the region and made this a very contentious issue indeed. (Get caught up here.) Which puts the Goodman episode in context, though it certainly raises eyebrows, and then some.


Meanwhile Goodman, an immensely popular radio host, may not have the media footprint of Sarah Palin but has nonetheless seen impressive crowds turning out all over the place on her book tour: Los Angeles, Oregon (here & here), Seattle (here and here), and, of course, Vancouver. Her fan base is loyal and passionate. This is unlikely to discourage them.

>>>VIDEOS: Goodman arrested at the RNC; Vancouver Public Library announcement; Goodman on Canada: “Do you all just talk about the Olympics?”