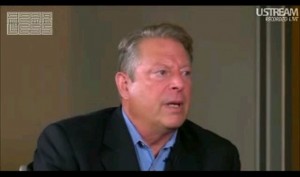 Al Gore pushed the rhetorical envelope yesterday when he compared skeptics of climate change to racists during the Civil Rights Movement. Gore was sitting down for an interview with Alex Bogusky of the Climate Reality Project, and suggested that young people today whose parents do not believe in climate change are asking the same questions now that race-conscious young people in the 60s asked their parents.

In some circles, according to Gore, just using the words “climate change” is considered taboo, as was the case with Southerners bringing up racism. The interviewer suggested the comparison may not be quite accurate, considering the scientific evidence available for global warming. However, Gore suggested that there is a moral component that both arguments share.

Later in the interview, Gore addressed comments made by Rick Perry about climate change, and saw his remarks as part of “an organized effort to attack the reputation of the scientific community as a whole.”

“It’s not in [scientists’] nature to get ready to constantly defend themselves against political attacks. That’s not want they expected to be doing in their lives.”

Watch the video below, courtesy of Ustream: