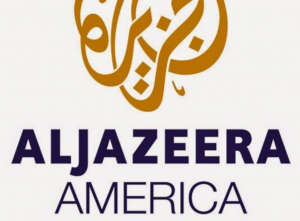 Al Jazeera America has always had an uphill battle (uphill as in “Everest”) and very little margin for error since launching in 2013. Note: It’s hard enough to successfully launch any cable news network in such a fractured environment these days. Marketing and branding play a huge role. And in the case of Al Jazeera America (AJAM), its brand perception of being anti-American (or anti-West)–which is an unfair but tangible truth since going live–has been and always will be its Achilles heel.

Note: AJAM does some very good journalism and stays neutral in a manner not unlike the BBC. Opinion programming is mostly a foreign concept as the mission appears to be straight reporting. That reporting–particularly the international stuff out of the Middle East–is solid and digs deeper into stories its competitors tend not to. But behind the scenes, the network is a mess. Many senior executives who arrived with impressive resumes from other major news organizations have departed. It’s original CEO is out (Ehab Alshihabi). A $15 million dollar lawsuit looms from a former employee claiming her executive boss was hostile to women and made comments that could be considered to be anti-Semitic.

And ratings–and yes, they matter greatly–have been well below expectations…clocking in with an average of 15,000 viewers daily. By the way, we’re not talking 15k in the demo, but total viewers. Context: Al Gore’s Current TV–which Al Jazeera purchased for $500 million primarily because of its reach/access (over 60 million homes)–averaged 31,000 viewers daily, or more than double.

Which brings us to the “very little room for error” part when it comes to perceptions: Exhibit A this week in the form of Al Jazeera America producer Hashem Said, who decided to Tweet this criticism of ABC News out after the outlet didn’t show–in his mind–proper respect to San Bernardino terrorist and mass murderer Tafsheen Malik by showing a photo of her without a burqa that covered her face: 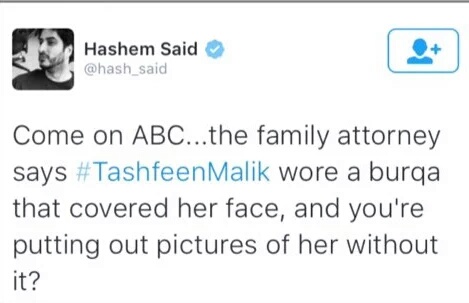 You know the drill from here: Twitter explodes in outrage and the offender either doubles-down or apologizes. Said went with the former before relenting to the latter:

@hash_said @OhioCoastie I think murdering 14 people puts slightly more shame on her culture and family than not having her face covered.

@hash_said I honestly think you should apologize for what you said. Those people's lives mattered more than any dishonor to her family.

Then he tries a little humor…

Why does this always happen to me on a Friday?

I apologize for causing any offense or disrespect, it was not intended. I should have exercised more tact and precision. My apologies.

Said would also delete the original tweet that started the outrage, but the damage is done (screen shots taken before deletion ensure that): Damage not really to Said, of course, but to Al Jazeera America. It may be his own Twitter account and opinions may be his own, but like we’ve seen far too many times lately, the network and its perception still gets lumped into this…because basically nobody knows who Hashem Said is, but they do know Al Jazeera. And all this kind of rhetoric does is reinforce that unfair impression mentioned before.

Another week, another Tweet gone bad. Some would argue Said has the right to share whatever he feels because the account is his and does not belong to the network that employs him.

Sorry…that’s not the way it works. Work for a network, you’re always representing it whether you’re on the clock or not.

Al Jazeera continues to struggle. Ratings and morale are low.

And the last thing it needs right now are its employees seemingly defending the honor of mass murderers in a very public way.