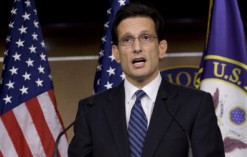 Norman Leboon, 38, was charged after he allegedly recorded and posted on YouTube a video in which he threatened to kill the congressman and his family.

“My Congressman Eric Cantor, and you and your cupcake evil wife,” the video said, according to the complaint. “Remember Eric … our judgment time, the final Yom Kippur has been given. You are a liar, you’re a Lucifer, you’re a pig, a greedy f—ing pig, you’re an abomination, you receive my bullets in your office, remember they will be placed in your heads. You and your children are Lucifer’s abominations.”

This scary news comes on the heels of a week of news reports about various acts of violence towards members of Congress who voted for Health Care including a (now-debunked) story about how Minority Whip Eric Cantor’s office was shot at. Add all this to today’s story about a raid on Christian militia who was making plans to kill police officers and you’d be forgiven for concluding the entire country has collectively gone off its rocker. In a very scary violent way.

But before everyone starts jumping to conclusions and drawing direct lines between Norman Leboon and Tea Partiers, and the Health Care vote, and gun metaphors, and the elevated rhetoric of the last two weeks it might be a good time to point out that all signs point to Norman Leboon being an actual crazy person whose craziness precedes anything to do with the HCR vote and is not actually limited to politicians. Or people.

Leboon’s YouTube page (I warn you, it’s a doozy…sampling below) dates back 10 months and also includes threats to burn CNN to ground, and assertions that all ABC News employees and YouTube employees will lose their firstborn sons. Also, he threatens to burn down all malls unless the movie Babe the Pig is removed. Clearly not a stable guy. At all. But also not somebody who’s only just gone round the bend thanks to, you know, recent Armageddon-like rhetoric…if that’s any consolation.