Allen West Blasts ‘Misconceived’ Policy On Women In Combat: Could Lead To ‘Demise’ Of Military

Allen West Blasts ‘Misconceived’ Policy On Women In Combat: Could Lead To ‘Demise’ Of Military 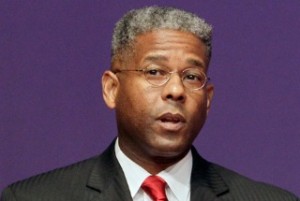 Yesterday news broke that the military’s ban on women in combat roles will be lifted — and on Thursday, Allen West, former Florida congressman and Army veteran, voiced his opinion on the issue. In a nutshell: He’s apparently not in favor.

West tweeted his sentiments on Twitter, pointing to a “misconceived lib vision.” 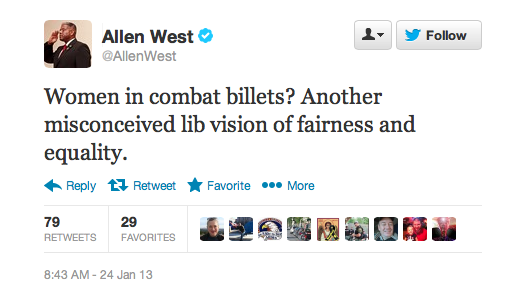 However, to make the insidious policy decision that we shall now open up combat billets to women is something completely different. GI Jane was a movie and should not be the basis for a policy shift. I know Martha McSally, have known women who are Apache and Cobra helicopter pilots, and served with women who were MPs, but being on the ground and having to go mano y mano in close combat is a completely different environment.

I completely disagree with this decision and can just imagine all the third and fourth order effects and considerations for implementation, such as standards for training. Unless the Obama administration has not noticed we are fighting against a brutal enemy and now is not the time to play a social experiment with our ground combat forces. President Obama, as Commander-in-Chief, should be focused on sequestration and the failure of his policies in the Middle East. This is the misconceived liberal progressive vision of fairness and equality which could potentially lead to the demise of our military.

The Associated Press reported that the move would open “hundreds of thousands of front-line positions and potentially elite commando jobs after more than a decade at war.”