Alt-Right Protesters Tell Mediaite Why They Marched: ‘A Step Toward GOP Becoming Party for Whites’

Alt-Right Protesters Tell Mediaite Why They Marched: ‘A Step Toward GOP Becoming Party for Whites’

A shaky clip of some of the violence I saw in Charlottesville — it ends in me getting tear gassed and running out. pic.twitter.com/QS33tOX9z3

According to leading alt-right protesters, the violent rally in Charlottesville, Virginia staged by hundreds of white nationalists served as a response to “cosmopolitan elites’ attack on whites” — as well as a step toward the “GOP becoming a party exclusively for the white race.”

“White people are tired of being told by the cosmopolitan elites that we are the problem, they can’t keep blaming [us] or else incidents like this will continue,” said James Allsup, an alt-right figure and former chair of the Washington State College Republicans Federation.

Cosmopolitan elites include the mainstream media, establishment politicians, and Hollywood figures, according to Allsup.

Allsup is a YouTube partner who has nearly 150,000 subscribers to his channel and over 20 million views on his videos. He posts political and cultural commentary often attacking ethnic diversity, feminism, and Muslims.

President Trump’s response to the violence that left at least one dead in Charlottesville, Virginia — where he condemned “this egregious display of hatred” — was taken as an endorsement of the alt-right by Nicholas Fuentes, an alt-right online TV host for Right Side Broadcasting Network.

“President Trump’s comments perfectly aligned with our side of the protest today, as they were intentionally ambiguous to go along with Washington’s speech codes, yet still managed to condemn the violent Left,” said Fuentes.

Allsup agreed with Fuentes’ sentiment, as he claimed Trump is “hamstrung by politically correct culture,” yet still showed support for the white nationalist rally in his comments by condemning general violence — which Allsup alleges was instigated by the counter-protesters — rather than condemning specific groups.

“President Trump should be more specific though, he should condemn the violent Left,” added Allsup.

Fuentes believes this protest was a step towards the Republican Party becoming the party of “white identity,” saying “the next 20-50 years will be consumed with tribal identity politics, and white Americans will have to decide which side they are on.” 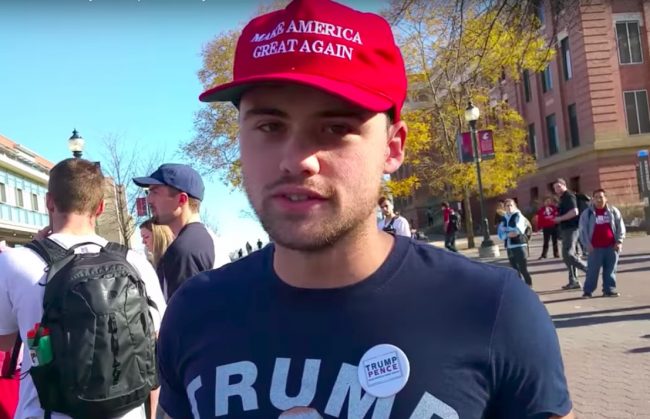 The violence in Charlottesville, Virginia reached a fever pitch at roughly noon on Saturday, as glass bottles and bricks were lobbed into crowds, baseball bats and hammers were used as clubs, and punches and kicks were thrown. Tear gas and pepper spray were also deployed by both protesters and the police.

Alt-right protesters and counter-protesters left the scene covered in blood, usually as a result from vicious head wounds.

The majority of the violence deescalated after a state of emergency was declared and police and members of the National Guard shut down streets and cleared out Emancipation Park.

The violence was precipitated on Friday night as tension escalated in the small college town when dozens of alt-right, Nazi, and white nationalist protesters took Tiki torches onto the University of Virginia’s campus to declare “white lives matter.” The catalyst for these violent events was the alt-right’s decision to protest the removal of a statue in Charlottesville, Virginia depicting Robert E. Lee, the commander of Confederate armies during the Civil War.

On the other side of the conflict, leading counter-protester Jabari Brisport explained to Mediaite that his reason for being in Charlottesville was stopping and containing the alt-right movement. “It’s a vicious, viral ideology that these white nationalists promote and it needs to be stopped before it has the room to spread,” said Brisport.

The counter-protesting leader admitted that the level of violence was heightened by all who were involved, but defended his side by saying, “I can’t say which group started it, I don’t know if that’s even still a valid critique, because the instigation happened when a bunch of alt-right, white nationalists decided to throw a bigoted hate rally.”

Brisport is currently running for a seat in the New York City Council as a Democratic Socialist, and his grassroots campaign has been picking up steam in recent weeks.

The candidate added that he does not believe the alt-right is representative of Virginia or America as a whole, and instead it is “a very loud minority of people.”

“This country has had racism since the day it was made, I don’t see that going away anytime soon, but I hope we can actively contain this new racist movement,” said Brisport, who was also tear gassed while counter-protesting.

Another counter-protester expressed his frustrations of the alt-right protesters by quasi-jokingly quoting the film Inglorious Bastards. “Ya’ll will get me 100 Nazi scalps taken from the heads of 100 dead Nazis, or die trying,” he shouted to his comrades.

Note – this article has been edited since first publishing to change activist Jabari Brisport’s label to “counter-protester.”

[image and video via Mediaite]