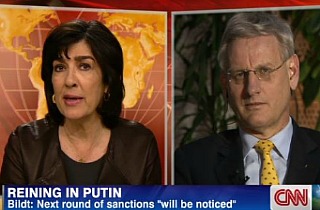 While new sanctions announced on Thursday by President Barack Obama and other sanctions being considered by the E.U. against Russian power brokers “will be noticed” by Russian President Vladimir Putin, Swedish Foreign Minister Carl Bildt told CNN’s Christiane Amanpour on Thursday, there is no telling whether or not he can be stopped from invading Eastern and Southern Ukraine. “I’m pretty convinced that his real agenda is not Crimea, but Kiev.” Bildt asserted.

“What is happening now is that we see Russia emerging as an unpredictable power,” Bildt observed. He said that, not only will sanctions have a negative effect on the Russian economy, but they will also make foreign investors wary of investing capital in Russian ventures.

“I hope that we will be able to deter him,” Bildt told Amanpour. “He has shown that he is willing to do things that most of us didn’t think that he was going to do.”

“Hope doesn’t have any battalions, no brigades,” Amanpour shot back. “Am I to understand, is Ukraine to understand, that if President Putin decides to go militarily into Ukraine, there is not much anybody can do to stop him?”

“Well in that particular case there would be no question about that. Then you will have very significant sanctions coming,” Bildt replied. “Then I think we are entering a completely different ball game.”

“That might not stop Putin at the end of the day,” he conceded, “but I think the costs will be very significant if he does.”

Amanpour asked if Bildt and his colleagues agree that Putin plans on invading more of Ukraine. “We don’t know,” he replied. Bildt added that he believes Moscow intends to “play this long” and it may take years before Russia again has a friendly government in Kiev.