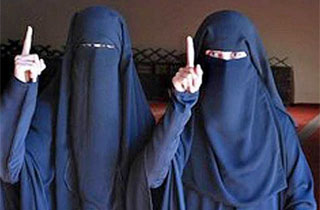 Three Denver teenage girls were detained by American officials after they attempted to fly to Syria to join ISIS. An official speaking to ABC described the girls as “disaffected youth.”

The girls, whose names have not been released, were tracked down in Germany after an acquaintance of their flagged authorities to their desire to enter Syria and “fulfill what they believe is some vision that has been put out on a slick media campaign.” (And, truly, it is slick — so slick that ISIS has been playing up the presence of hot terrorists in their ranks, such as a Justin Bieber-lookalike, to attract people.)

The teenagers, who are all 16 and under, were not arrested, and sent back to their families in the US.

They weren’t the first teenage girls to attempt to join ISIS: according to Kings College London, “50 [girls] from the UK, 60 from France and 40 from Germany” are likely in ISIS’s ranks, drawn there after being radicalized, only to have their visions of martyrdom dashed upon arrival. “They said the girls were forced to marry Islamic fighters, obey strict Islamic laws and lived under permanent surveillance,” says one report from Der Spiegel. (The photo, above, is of two Austrian teenagers who ran away from home to join ISIS, and reportedly regret their decision.)

And they weren’t the first American teenagers, either: an 18-year-old girl from Denver recently pled guilty to attempting to join ISIS after she fell in love with a militant online.