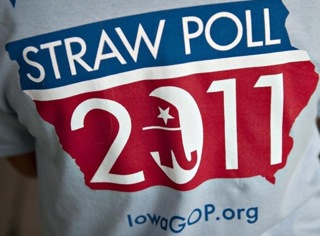 After a day of delicious fried items, political rock concerts and a series of campaign stump speeches, we finally have the results of the Ames Straw Poll. Coming out on top is Rep. Michele Bachmann with Rep. Ron Paul next, and coming in a distant third was Tim Pawlenty

AMES, Iowa — Minnesota Rep. Michele Bachmann scored a victory in the first major test of the 2012 presidential contest, a win likely to provide her considerable momentum as the race ramps up.

Texas Rep. Ron Paul (Texas) came in a very close second while former Minnesota governor Tim Pawlenty finished third, a showing that will raise major questions about his ability to remain a viable candidate as the race moves forward.

For Bachmann, the victory at Ames solidifies her as the clear frontrunner in the Iowa caucuses which are set to kick off the presidential balloting process in early February 2012.

Bachmann entered the straw poll as the favorite, thanks to the fact that polling suggested her surging in the state and former Massachusetts governor Mitt Romney chose not to participate in an event he won in 2007.

Taking no chances, Bachmann saturated the state with television ads in the run-up to the Straw Poll and barnstormed across the state in the final days before the vote. (On Friday, she did five events including an evening rally in which she through cornballs into the crowd and jitterbugged with her husband, Marcus, on stage.)

Here are the voting results: 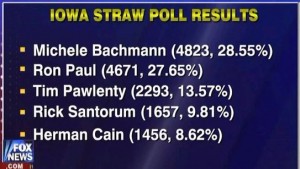 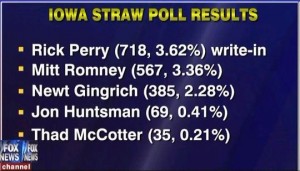