Andrew Breitbart On BP Oil Spill: ‘This Is A Media Scandal First And Foremost’ 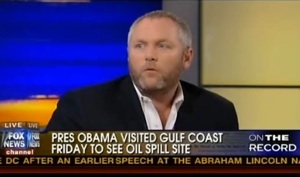 Last night Martha MacCallum guest hosted for Greta Van Susteren‘s On The Record and had on Kristen Powers and Andrew Breitbart to discuss the political news of the day. Regarding the BP Oil Spill, Breitbart opened with “To me this is a media scandal first and foremost. When you have the Joe Sestak scandal going on at the same time as the oil scandal going on down in the gulf, these are two mega-scandals of epic proportion that the Bush administration certainly could not have withstood.”

Breitbart owns and operates the right-of-center and influential “Big” network of websites which includes Big Government and Big Journalism among others, followed with “all eyes on whether the media will treat this as the scandal that its emerging to be, and Obama seems disengaged, and he will not listen to the boots on the ground,” likely giving a cue as to where the following week’s opinion media will go.

MacCallum appeared to slightly defend the Obama Administration’s initial reaction to the spill (and perhaps the media as well) by saying “in the beginning, the administration tried to distance themselves, they said, you know, this is BP’s issue. And, you know what? We all looked at this initially I think and said you know, tragedy. 11 people killed, a horrible fire, a big explosion. I didn’t realize at the beginning that this was going to turn into what it is.”

But Powers shot back at the Administration saying “I found if very curious that they keep saying over and over again…’it’s very important that everyone understands that the government has been in charge from the very beginning.'” Powers took this as a serious indictment, following with “if that’s true…they haven’t done anything…all they are doing is telling us that they are incompetent.”