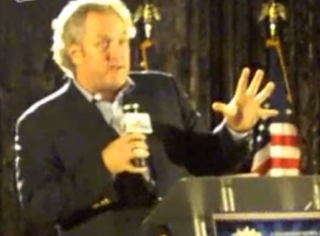 Andrew Breitbart has, once again, gone too far. At a speech this weekend at Tea Party convention TeaCon, Breitbart attempted to serve the crowd red meat while being wildly profane, going off on Rep. Nancy Pelosi for being a “bitch” and joking that chronically irrelevant person Janeane Garofalo was “Hollywood’s sympathy f*ck,” therefore negating the validity of her opinions. In doing so, Breitbart crossed a fairly thick line: there is a way to give the crowd red meat without slaughtering one’s own reputation in the process.

The comment on Rep. Pelosi arose from the interminable controversy surrounding the possibility that Tea Party members either did or did not shout racial epithets and spit on black Congressmen. Because there is no video showing that they did so, Breitbart claims it didn’t happen, while others argue that it is positive and not negative proof that is required to close the case. You can see how this can go on forever. Anyway, the culprit, according to Breitbart, was Rep. Pelosi, who he did not abstain from calling a “bitch” for promoting the claim, which he considers a “lie” and “smear,” that the event happened. Later on in the speech, he goes after the “execrable” Garofalo for some wildly inane liberal comment she made, probably on Current TV. He explains that, as a longtime Hollywood resident, he knows her as “Hollywood’s pity fuck” who gets called upon to play the role of “loser” in movies when casting people feel sorry for her. So yes, at the very least, it’s a metaphor.

The two clips via Breitbart.tv below:


Rep. Pelosi is a controversial, radical figure– disagreements on her policies easily abound. The allegations of spitting and lobbing racial epithets at Congressmen are anything but a cold case, and given the lack of definitive evidence, could be argued either way ad infinitum. It could also be argued that this debate about whether or not it happened, and whether or not video evidence is necessary in such a volatile situation to prove it, is a legitimate conversation to have.

RELATED: Andrew Breitbart To Mediaite: Yes, He’s After The ‘Institutional Right,’ Too

And as for Garofalo, it’s hard to deny that at this point, having no discernible career or necessary background to earn relevance in any capacity, she has earned herself the rare and laudable title of “idiot.” “Execrable” isn’t entirely off-base on this one, though it’s not her fault people take her seriously. Needless to say, “pity fuck” most definitely is. It’s the sort of comment that any level-headed person would yell at their friend for had they made it in private at Thursday night Happy Hour– it has no place in the public discourse, in a speech about ideological values. Breitbart will argue that it is a metaphor, but it is impossible not to raise the question of whether said metaphor would ever be used against a man of similar stature. Would any conservative call Alec Baldwin a “pity fuck” as quickly as they would Garofalo, given that their politics align? Or, for that matter, any other famous liberal man in Hollywood that hasn’t been in a movie in years? If you answered “no, of course not, just look at him,” you’ll see why any woman in the public eye should have a problem with this statement, intent aside.

And it’s sad. Breitbart has dedicated most of the past decade to building up a formidable platform with which to spread his message– on the whole one of small government and tolerance– the pendulum of his tenor swinging wildly and entertainingly from, as he put it, “Nice” to “Angry Andy.” As a general rule, “Nice Andy” is a much smarter, convincing character than whoever showed up to TeaCon. He’s the guy who went up and introduced himself to Rachel Maddow at an MSNBC party, who exposed the very ugliness he exhibits here in the left by simply being physically present at a liberal conference last year, who got asked whether he was a “top or bottom” by John Waters on Bill Maher’s show, laughing it off. He’s been on television with an “irony mustache.” Generally, his willingness to engage the other side and not take himself seriously makes Breitbart one of the more likeable characters on the American right. And not just when he is having a bit of fun.

RELATED: Breitbart Back On MSNBC, Introduces World To “Jovial And Measured Andrew”

To the conservative-libertarian movement (with which I identify), there is much value in Breitbart as an eloquent thinker and writer who goes out of his way to be as inclusive as he is controversial, and as willing to engage in productive discussion as he is to expose the dirtiest secrets of his ideological enemies. Needless to say these comments belie any of that good will, and reflect as negatively on those who wish to support his cause but find it so hard to as anything some of his more deplorable hires have done in the past. Ultimately it’s a discipline problem, not a message problem, and one that those who look up will mature into correcting sooner rather than later.