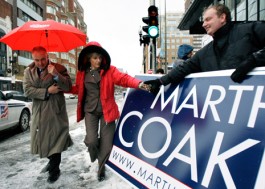 The special election today in Massachusetts to fill Ted Kennedy’s Senate seat has taken on epic proportions over the last week or so. And not just because the headlines have become increasingly dirty. The election is being viewed by many as a one year referendum on the Obama administration (he was inaugurated a year ago tomorrow) but most importantly if Martha Coakley loses today it will shift the balance in the Senate and ostensibly put health care reform in jeopardy. Or kill it altogether, depending. Andrew Sullivan, meanwhile, thinks a Coakley loss (of which he is certain) portends to bigger and darker things.

They [the FNC/RNC machine] have successfully channeled all the rage at the massive debt and recession the president inherited on Obama after just one year. If they can do that already, against the massive evidence against them, they have the power to wield populism to destroy any attempt by government to address any actual problems.

This is a nihilist moment, built from a nihilist strategy in order to regain power … to do nothing but wage war against enemies at home and abroad.

What comes next will be a real test for Obama. I suspect serious health insurance reform is over for yet another generation.

Even if Coakley wins – and my guess is she’ll lose by a double digit margin – the bill is dead.

Yes, I’m gloomy. Not because I was so wedded to this bill, although I think it’s a decent enough start. But because if America cannot grapple with its deep and real problems after electing a new president with two majorities, then America’s problems are too great for Americans to tackle.

Dramatic yes. But likely, too, that today’s vote may see the end of health care reform and a new tenor for Obama going forward. Painfully ironic that it’s Ted Kennedy’s Senate seat that may be that last unpassable hurdle for national health care reform. Of course, we won’t know that until sometime later tonight because there are no exit polls in Mass. today.