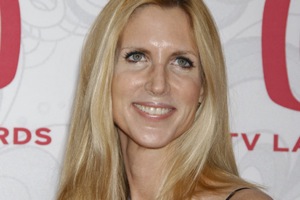 It’s getting hard to write about conservative commentator Ann Coulter‘s outrageous statements. Judging from her latest op-ed, it’s starting to get just as challenging for her to keep producing newsworthy statements that actually make sense. It’s very possible that liberals would be fuming about Coulter’s latest item, “Republicans on Track to Snatch Defeat From Jaws of Victory,” if only they could figure out what she’s saying. A sampler: John Boehner is a rape victim, Republicans and Democrats are prostitutes of varying quality, and Hitler is enjoying “great personal popularity.”

The short answer is Coulter is trying to offend everyone, of course: Republicans, Democrats, Wall Street, the Tories… it goes on. The only person that seems to come out of this unscathed is former Jimmy Carter adviser Pat Caddell, who provides a completely irrelevant prostitution metaphor in the middle of a larger, and equally inscrutable Third Reich allegory, presented here is its complete form:

For the past year, the Democrats’ Wall Street BFFs have had lower public approval ratings than Hitler. (When I say “Hitler,” I don’t mean Dick Cheney or George W. Bush; I actually mean Adolf Hitler.) While Hitler continues to enjoy great personal popularity, there is a growing dissatisfaction with his policies.

How could Republicans possibly screw that up? We try harder.

No sooner had the news come out that Goldman Sachs (Joseph Goebbels in this metaphor) had given Obama an astronomical $1 million in campaign donations, than Republican John Boehner decided that this was the time to suck up to Wall Street! So Boehner flew to New York to meet with Wall Street bankers and ask them to be Republicans’ friends.

Boehner is like the guy who just got raped in prison and doesn’t know what happened to him. Hey — what was that? Should I have thanked the guy?

As Pat Caddell says, Democrats are whores, but they expect to be paid; Republicans’ names are scrawled on the bathroom wall: “For a good time, call the GOP!”

As depressing as it is to watch the Republican Party dive headlong off a cliff, at least we have Dick Blumenthal.

The only part of this paragraph that seems to make a statement is the part about Goldman Sachs– Republicans, it seems to explain, keep making the same mistakes Democrats make, only worse. The rest of it– Hitler’s approval ratings, the prison rape scene, prostitution, Dick Blumenthal?– don’t really seem to relate to each other or, really, anything else. What could this body of text be providing evidence for?

A bit of sleuthing unveils this thesis statement: “Your job, Republicans, is not to go on Fox News and whisper sweet nothings in conservatives’ ears. Your job is to repeal the Obama agenda. Raising expectations so high that a 30-seat Republican pickup will seem like a loss is not helping.” She seems to be making the point that Republicans should not be counting their Congressional chickens before they hatch in November– how offensive sensible and intelligent! But “sensible and intelligent” is not what Ann Coulter is paid to do, so she tried to bury the point some people would take seriously under a word soup of the most offensive terminology possible, hoping a sensitive liberal group would take notice and give her publicity. This time she didn’t succeed in offending so much as confusing. The ingredients of outrage are all there— Hitler, Goebbels, prison rape, way-too-easy politician/prostitute analogies, friendly fire against Republican leadership— they just aren’t cooked together quite the right way.

For anyone who ever wondered what would happen if Ann Coulter articulated a thought acceptable to the mainstream, it appears we have found the answer: She would spend one sentence on that thought (“Note to Republicans: Whenever possible, victory parties should be held after the election, not before it.”) and surround that sentence with references to things and people universally apalling to society, such that finding it becomes a game of Where’s Waldo? rather than a reading exercise.