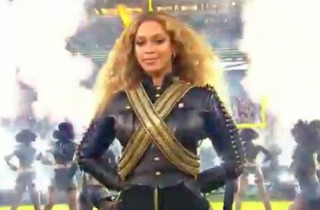 In the wake of Beyoncé‘s supposedly anti-police Super Bowl performance, a demonstration has been planned in protest of the singer’s message at the NFL’s headquarters in New York.

While the pop star received critical acclaim with her explosively-choreographed performance of “Formation,” Beyoncé has also been criticized by those who say she injected racial politics into the game with allusions to the Black Panthers and #BlackLivesMatter. An unnamed rally organizer set up a plan on Eventbrite, saying that Beyoncé’s “hate speech & racism” had to be stopped.

Are you offended as an American that Beyoncé pulled her race-baiting stunt at the Superbowl?

Do you agree that it was a slap in the face to law enforcement?

Do you agree that the Black Panthers was/is a hate group which should not be glorified?

Come and let’s stand together. Let’s tell the NFL we don’t want hate speech & racism at the Superbowl ever again!

The protest is scheduled for February 16, but Entertainment Weekly noted that a counter-protest is already scheduled that day in defense of the singer. “Don’t let anyone make her powerful statement about the value of Black life be overshadowed by those who don’t believe that our lives matter,” their event page says.

Former New York mayor Rudy Giuliani has been one of Beyonce’s most prominent critics on this issue, calling it “outrageous” that she could inject the subject matter into Football. Daily Show correspondent Jessica Williams, on the other hand, mocked the haters by sarcastically apologizing for the lack of “wholesome entertainment.”