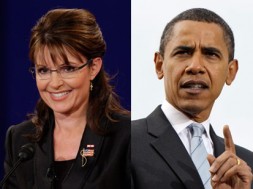 Sarah Palin is apparently just too good to resist. Regardless of whether what she is saying has any basis in fact (cf. ‘death panels’). Seems that the AP suffered from some Palinating today when they quoted Palin “quoting” some remarks President Obama made at last week’s nuclear summit without bothering to point out that she was taking Obama’s remarks slightly out of context. Here’s what Palin said on her inimitable Facebook page:

Mr. President, is a strong America a problem?

Asked this week about his faltering efforts to advance the Middle East peace process, President Obama did something remarkable. In front of some 47 foreign leaders and hundreds of reporters from all over the world, President Obama said that “whether we like it or not, we remain a dominant military superpower.”

Why doesn’t President Obama like being a superpower!? Actually, it seems he does, it’s just that he’s aware of the responsibility that comes with it. As pointed out by Greg Sargeant, here’s what the President actually said:

But what we can make sure of is, is that we are constantly present, constantly engaged, and setting out very clearly to both sides our belief that not only is it in the interests of each party to resolve these conflicts but it’s also in the interest of the United States. It is a vital national security interest of the United States to reduce these conflicts because whether we like it or not, we remain a dominant military superpower, and when conflicts break out, one way or another we get pulled into them. And that ends up costing us significantly in terms of both blood and treasure.

Emphasis mine. I know it’s shocking, but seems that Sarah Palin’s Facebook did not give the full story. What is actually a bit shocking, however, is that the AP didn’t feel it necessary to point out that Palin was taking the President out of context. In their piece on her remarks (which was picked up by Drudge) the AP provides Obama’s full quote but doesn’t bother to highlight the discrepancy between what Palin said and what Obama actually, obviously meant. The result being that Palin’s criticism is not only justified but rooted in fact, which it wasn’t.

Perhaps we’ve unofficially reached the point where we merely take “nuttiness” for granted. Or perhaps the AP’s oversight here is merely a reflection of the reality of U.S. national politics, namely that the truth matters less than catchiness…and Sarah Palin is nothing if not catchy.