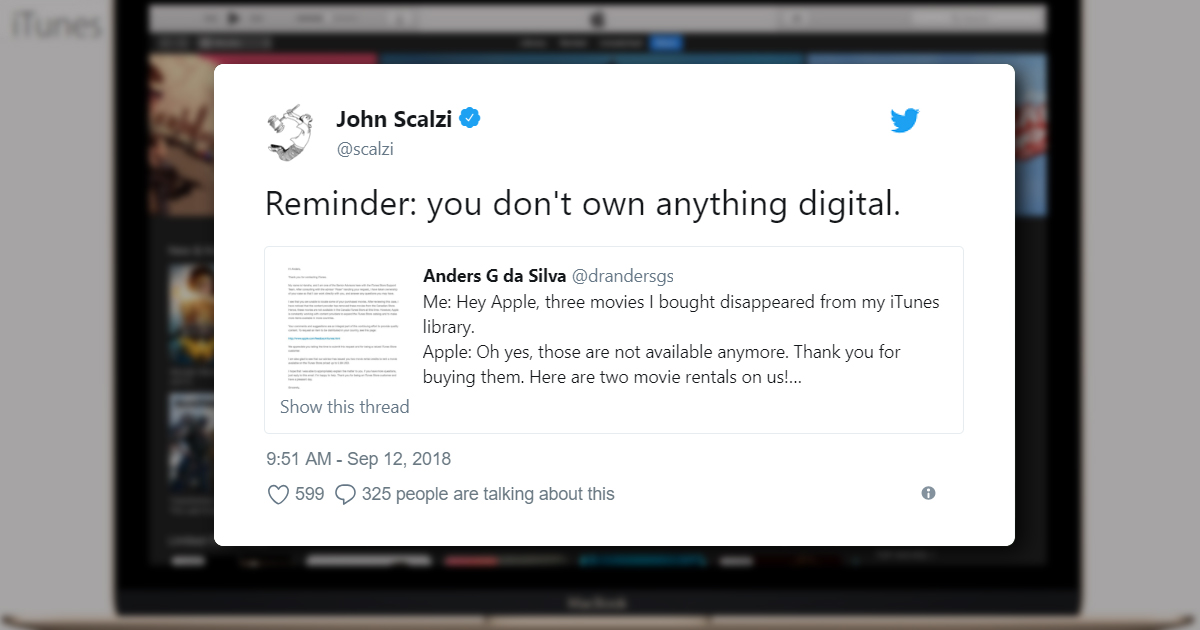 If you’ve ever bought a movie on iTunes, you may think you permanently own it. But as with so many things, and particularly Apple things, you probably should have read the user agreement. That’s what Twitter is finding out right now when it comes to digital ownership.

Me: Hey Apple, three movies I bought disappeared from my iTunes library.
Apple: Oh yes, those are not available anymore. Thank you for buying them. Here are two movie rentals on us!
Me: Wait… WHAT?? @tim_cook when did this become acceptable? pic.twitter.com/dHJ0wMSQH9

Here’s some text from that screenshot:

I see that you are unable to locate some of your purchased movies. After reviewing this case, I have noticed that the content provider has removed these movies from the Canadian Store. Hence, these movies are not available in the Canada ITunes Store at this time.

The word “purchased” doesn’t quite match with “these movies are not available” there, and that’s what has Twitter reacting.

Lol, they only say the movies are removed from the store, like that is a full explanation. If you buy a movie from a brick and mortar store and they remove it later, they don’t break and enter in all their customers houses to remove/steal the movie..

Given it says “Buy” and “Purchase” it is reasonable to assume the expectation is you own it for life.

The tech situation people are finding themselves in here is the result of DRM, digital rights management. As the Los Angeles Times pointed out, researchers from Case Western Reserve University School of Law and UC Berkeley’s School of Information published a 2016 study in 2016 on the how the reality of what a consumer “purchases” from retailers matches with the public perception of that purchase.

Retailers such as Apple and Amazon market digital media to consumers using the familiar language of product ownership, including phrases like “buy now,” “own,” and “purchase.” Consumers may understandably associate such language with strong personal property rights. But the license agreements and terms of use associated with these transactions tell a different story. They explain that ebooks, mp3 albums, digital movies, games, and software are not sold, but merely licensed. The terms limit consumers’ ability to resell, lend, transfer, and even retain possession of the digital media they acquire.

Obviously “even retain possession” is the most pertinent aspect of that result to this Twitter group realization.

that study found that 83% of users at that time did not understand that they were buying digital access on only a semi-permanent basis, and did not actually own the content.

Back in 2009, there was quite a media reaction when Amazon removed from user libraries, of all things, the book “1984” by George Orwell. There was even a lawsuit.

In subsequent emails from Apple to Anders Silva, they explained essentially the same thing.

Me: I am not really interested in the rentals. I want my movies back or my money back.

Apple: I totally get how you feel…

Me: Condescending, but go one…

Apple: You see, we are just a store front.

Pertinent text from that screenshot:

Please be informed that the iTunes/App Store is a store front that gives content provider a platform or a place to sell their items. We can only offer what has been made available to us via the studios or distributor. Since the content provider has removed these movies from the Canadian Store, I am unable to provide you a copy of the movies.

Aside from the question of the forthrightness or clarity of companies like Apple in explaining to a user what they are actually paying for, there are still a number of questions about the efficiency and functionality of DRM, and have been for years. One person replying to the current tweet threads noted genuine problem with the question of ownership that appears to have no solution, digitally.

To clarify: iTunes has deleted things on my local system from my iTunes library, which I put into my library by playing cds that I physically own. I've stopped using iTunes to put music on my computer.

You may have purchased a movie on DVD or Blu-Ray and added it to a digital library in the past. This individual purchased CDs of music and had them added to the iTunes library. When the “storefront” lost their distribution rights, the DRM software made no differentiation to ownership between a user who downloaded it, and one who had purchased the physical CD.

With DRM, when you purchase music, movies, video games, or even apps, ringtones … just about anything digital, you aren’t always buying exactly what you think you are. And when the digital landscape changes, you may find your “purchase” was just a really long but nevertheless temporary rental.

Reminder: you don't own anything digital. https://t.co/U0kDTWZ82X