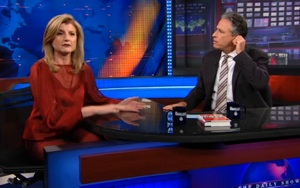 A few weeks ago, when Arianna Huffington announced on The Daily Show that she would provide busing for New Yorkers going to the “Rally to Restore Sanity,” it was apparently a completely spur of the moment decision. We had our doubts at the time (a couple are probably still lingering), but The Wrap has an interesting post up about the shock the announcement caused. Not only was Jon Stewart surprised, but also all of the folks back at the Huffington Post – who had to figure out how on earth this was going to happen.

And it’s not going to be easy…or cheap. The trip is estimated to cost around $250,000 with with 100 buses taking all of the eager, ‘sane’ folks (11,000 of which have already signed up). You’d imagine this would cause a few furrowed brows in the HuffPost accounting office and The Wrap claims that insiders have said as much. However all of the quotes they received show a much cheerier disposition.

“HuffPo’s President Greg Coleman agreed that the gesture came a surprise, but denied that there was any internal tension as a result.

‘Arianna has a sixth sense for promotion, for capturing lots of attention,’ said Coleman in an interview with TheWrap. ‘We were surprised when she made that offer. She didn’t tell us. But inside the Huffington Post this does nothing to hurt our revenues.’

Coleman is working to entice sponsors to underwrite the gesture, and turn the surprise into a revenue bonus.”

I’m still not sure this wasn’t planned out before Huffington’s Daily Show appearance but we hope it wasn’t because that would totally give us a new goal in life: create a company, put my name on it, go on TV, and then make outlandish (and awesome) promises just to see if the people who work there could make it happen. God, that would be a good life.

Watch Arianna’s original promise on the Daily Show below. Read the rest of The Wrap’s piece here and sign up for those free buses here.