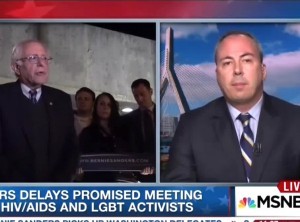 After putting pressure on the Bernie Sanders campaign to agree to meet with them, a coalition of HIV/AIDS activists now say that the independent Vermont Senator and Democratic presidential candidate is “misleading the public” about the content of that meeting, and “exploiting” their group for short-term political gain, even implying an endorsement by the group that they did not make.

Those charges are contained in a scathing open letter to the Sanders campaign signed by 19 members of the coalition, in which the group says Sanders pimped their meeting in a press release that made it sound like the group endorses a piece of legislation that Sanders supports:

While we were optimistic following what we felt was a productive meeting, our optimism quickly turned to disappointment when your campaign issued a news release misrepresenting the meeting with HIV/AIDS leadership entitled “Sanders Backs California Ballot Initiative to Rein in Drug Prices at Meeting with HIV/AIDS Advocates.” As 19 representatives of the coalition, nearly half of whom are either based in or affiliated with organizations in California, we are deeply concerned as this may now appear as if we were exploited for short-term political gain leading up to the imminent California Presidential Primary Election.

Your campaign’s release title and the bulk of its content mislead readers and the press to believe that our May 25 meeting was primarily focused on your endorsement of a California ballot initiative on HIV drug pricing. By extension, it also implies that our national HIV/AIDS coalition also fully endorses this initiative. Both these characterizations are inaccurate.

As we reported a few weeks ago, activist Michael Rajner appeared on Joy Reid’s show to lobby for a meeting with Sanders’ campaign after they paid his group less mind than even Donald Trump’s campaign, and when the pressure worked, Rajner and his group were pleased. According to the group’s letter, they still hope to engage with Sanders’ campaign in the future, but will be releasing the full meeting notes next week.

Update: The Sanders campaign responded to the activists’ letter by accusing them of being stooges for pharmaceutical companies. No, I’m not kidding. You can read the full response here, but here’s a taste:

This is absolutely absurd and ridiculous. No presidential candidate running for president is more committed to ending the AIDS epidemic than Bernie Sanders. And you would know this if you read Bernie’s plan. Here is a copy:

While we are disappointed in your continued mischaracterizations and repeated attacks on the Bernie Sanders campaign, it is not surprising that someone who depends on Gilead Sciences and other big pharmaceutical companies for funding would continue to drop bombs on the only presidential candidate who has the courage to stand up to the greed of the big drug companies.

I don’t receive funding from Big Pharma to engage in my advocacy as a volunteer, and the attack from the Sanders campaign lodged at Peter and the coalition is beyond the pale. I’m insulted and outraged. Their exaggerated and misguided attack on Peter, and the campaign’s failure to dignify our efforts, paints Senator Sanders as extremely out of touch with the issue of HIV/AIDS in 2016.

Interestingly, I emailed the Sanders campaign at 6:02 pm for comment on the activists’ letter, and at 6:08, Warren Gunnels posted this now-deleted tweet:

Sad attack from @BernieSanders campaign. Can they help me find this "fortune" they mentioned? pic.twitter.com/Xzql8AaDqF