Bernie Goldberg: Those In The “Elite Media Bubble…See Racism Everywhere” 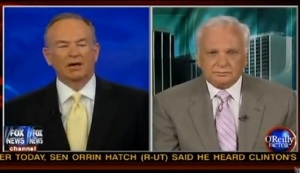 The limitations of punditry are a lot like blogging – one has very little time (or viewer attention) to get rather complex ideas across, and the resulting economy of words can often result in oversimplification. But Fox News analyst Bernie Goldberg recently came up with a brilliant solution: discuss the perils of stereotypes and overgeneralizations by stereotyping and overgeneralizing. Its like the onomatopoeia of television punditry…brillz content indeed!

First some background: race politics were a hot topic on last night’s O’Reilly Factor, pegged to NBC’s Norah O’Donnell calling out Newt Gingrich for what she perceived to be racially insensitive comments. Early in the program, host Bill O’Reilly had on guests Juan Williams and Mary Katherine Ham to deconstruct the comments of both O’Donnell and Gingrich (who had labeled President Obama an athlete). (For a complete rundown of that segment click here.)

But Goldberg dug deep into his explanation of raced based group-think in the mainstream media, claiming that “this is how they all think” and later “they see racism everywhere.” Of course this sort of oversimplification of a complex idea is over reliant on stereotypes and over-generalizations – the very stereotypes and generalization that comprise the very racist stereotypes that, in Goldberg’s esteem, the “liberal media” uses on a regular basis. Nothing like overstating and simplifying an issue to illustrate how overstated and simplified it is. Though, one does think that this was the exact intention of Goldberg. It was effective?

The country is in trouble. Because this is – this is standard thinking inside the comfy, liberal elite media bubble. This is how, you know, if I say this is how they all think, somebody is going to come out of the woodwork and say well, not everybody thinks that. This is how almost all of them think. They see, they see racism everywhere. They see everything as, I said through this prism of race. So Jonathan Capehart sees it at the Washington Post. Frank Rich sees it at the New York Times. Eugene Robinson sees it at the Washington Post. Leonard Pitts sees it at the Miami Herald and it becomes the acceptable narrative. Here comes Norah O’Donnell, who I’m sure is a lovely person. And she just picks up on this. She is just part of it. And that’s why your idea, you really have to do this. It needs to be some blow back on this.