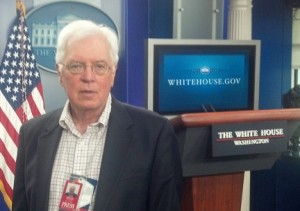 Liberal radio host Bill Press (who is also one of my Professional Left colleagues at the White House, and a friend) has been taking volcanic heat (and getting lots of hate mail) over his rant against our National Anthem, The Star-Spangled Banner. Surprisingly, CNN has outdone Fox News in covering Press’ distaste for the song, airing multiple segments on the controversy this morning. Before this thing gets any bigger, I thought it was time for Bill to answer for what he has said.

Press’ criticism of the song has led to predictable outrage, and while my colleague Noah Rothman defended the musical portion of Press’ critique, I’m afraid I have to disagree on all counts. I love The Star-Spangled Banner, and pretty much all patriotic 4th of July-type songs (I even love John Ashcroft‘s Let The Mighty Eagle Soar, God help me). Unlike Bill, though, I can actually sing them all, so maybe that has something to do with it. It feels good to sing the National Anthem. If I have any quibble with it at all (aside from the fact that there’s a hyphen in the title, which I never noticed until today), it’s that when it was written, our country wasn’t actually the “land of the free.”

There’s also an awkward bit of phrasing that makes it sound like the ramparts are gallantly streaming, but aside from that, I love it.

At the risk of receiving my own hate mail, I should point out that while it doesn’t particularly bother me, Bill is factually correct in observing that there are brave people in other countries, so America is not technically the home of the brave. That’s sort of a tic of patriotic songs, though, so the fact that I also love Scotland The Brave shouldn’t rip a hole in space-time. I’m not sure there are any national anthems in the world that include the lyrics, “where we’re all a bunch of pussies.”

That’s the great thing about America, though, we really are all free to disagree about things like a song that was originally written as a hymn to an ancient Greek poet (and had the word “incontinent” in it, I’ve just learned), by the very people who were attacking us in our version of it. That’d be like Luke Skywalker setting his own theme song to The Imperial Death March.

In that spirit, I asked Press to answer a few quick questions on the brouhaha, which he quickly did: (via email)

Tommy Christopher: Just saw your diatribe being teased on CNN. What do you think of all this
uproar?

Bill Press: I think it proves it’s a slow news day. I’m hardly the first to suggest we need a new national anthem.

TC: Are you having any second thoughts about hating the anthem?

BP: Absolutely not. There’s nothing sacred about the Star-Spangled Banner. It’s only been our national anthem since 1931. It wasn’t written by the Founding Fathers. It’s not written in the Constitution. And it’s a horrible song: unsingable, militaristic, words tied to the tune of an old British drinking song. We have a lot better alternatives: God Bless America, America the Beautiful, My Country Tis of Thee, This Land is Your Land

TC: Would you support a lyrical revision to “and A home of MANY brave?”

TC: Who do you think should write the new national anthem?

TC: Did you get any grief from the suits over your remarks?

TC: If The Star-Spangled Banner is too militaristic, isn’t America the
Beautiful kinda wussified?

TC: What changes would you make to the actual flag?

BP: Remove one star, for Mississippi

TC: Why do you hate America?

BP: I love my country, but I’d love it more if we had a national anthem we could all sing.

Just so it doesn’t seem like I’m throwing Bill under the bus here, I also think some annoyingly liberal things about America, like how it annoys me when people start chanting “USA! USA! USA!”

Finish the thought, people. You’re just giving the other side the chance to alternate that with chants of “Sucks! Sucks! Sucks!”