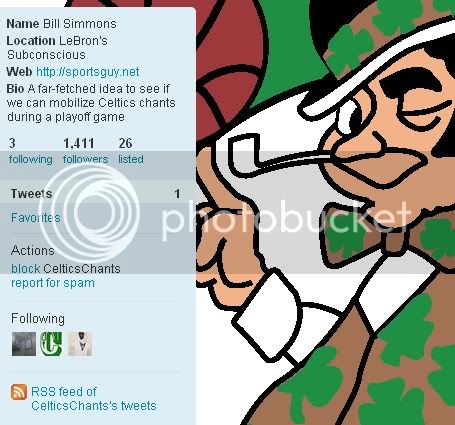 In less than a year, Bill Simmons quickly – and not surprisingly – amassed a fantastic amount of Twitter followers as a sports writer. However, his next step isn’t in quantity; it’s in innovation and devotion to his Boston Celtics. Buried in his NBA Round 2 wrap-up, he unveiled his newest idea: a Twitter account dedicated to starting chants during home games for his team:

When LeBron shot his first set of free throws during Game 3 of the Boston series, I was disappointed that the Boston crowd didn’t chant either “You’re a fa-ker! You’re a fa-ker!” (to tweak him about his injured elbow) or “You’re gonna leave! You’re gonna leave!” That’s when I realized something: Thanks to Twitter, we could mobilize crowd chants almost to the minute during playoff games.

For instance, let’s say someone created a Twitter account called @CelticsChants (just for fun, I did it) and became the go-to chanting coordinator during games. Before Game 3, I post the tweet, “Chant for first LeBron FTs: ‘You’re a fa-ker! You’re a fa-ker!'” Then, during garbage time, I post another one: “If LBJ goes to line again, chant, ‘You’re gonna leave! You’re gonna leave!'” Even if 500 people at the game were following that account, wouldn’t that be enough fans to get those chants rolling so everyone in the stadium joined in? Just for fun, I’m trying this for Game 6 in Boston: www.twitter.com/celticschants.

The only history of anything similar is the college hoops’ fans (probably most known to be conducted the those Blue Devils who camp out in Krzyzewskiville) and chant sheets passed around before games. But that doesn’t allow the on-the-spot mobilization and embracing the technology that so many sports fans bring with them to games.

Simmons’s column went up just around 1 p.m. – and now the account is gaining followers by the second. As of 1:20 p.m., he’s approaching 1,500 followers and growing fast. It isn’t likely that the entirety of the Garden will be following it come Game 6, but the results are going to be fascinating.

Mediaite will soon be launching SportsGrid, a sports news, opinion, and rankings site. You can sign up for SportsGrid’s newsletter here.