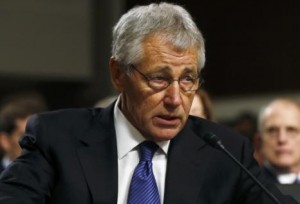 Senate Republicans have taken the extraordinary step of filibustering (while not calling it a filibuster) President Obama‘s nomination of former Republican Senator Chuck Hagel for Secretary of Defense, which has never been done before. The White House, and most reasonable people, are outraged by this, but not always for the right reasons. What the Republicans did was foolish and harmful to America, but not because it was unprecedented, not because Hagel is such a great pick, and not because the President deserves to have his first choice for important cabinet positions, but because they’re going to confirm him anyway. They’re just going to make him miss an important NATO summit first.

Senators in the minority have tried to block cabinet nominees twice before, but when the Senate failed to meet the 60-vote cloture threshold, Republicans became the first to succeed. They plan to hold an up-or-down vote following the current recess, at which time Sen. Hagel will very likely be confirmed. In the meantime, though, outgoing Secretary of Defense Leon Panetta will have to attend next week’s NATO summit in Brussels, presumably in his Crocs and gardening hat:

While Panetta still planned to head home for the weekend, he’s going to be on the job for a bit longer.

“Secretary Panetta will remain secretary of defense and will maintain all his authorities until a new secretary is sworn in,” even if that does not happen until Congress returns from its recess, a senior agency official told CNN.

Panetta will travel to the NATO summit in Brussels next week, but the extent of his duties at his Pentagon office beyond that is not clear.

If Republicans actually intended to block Sen. Hagel, that would be a different story, they’d have to make that case, but this just tells the rest of the world that at least half of our government are idiots, and when Hagel is finally confirmed, he won’t get any of the jokes NATO leaders tell each other at the next Summit. It will be embarrassing. “Who’s Ferguson?” Hagel will ask, to eyerolls all around.

However, the mere fact that Republicans are filibustering (or pseudo-bustering, or whatever they’re calling it) a cabinet nominee for the first time in history should surprise no one, least of all Senate Majority Leader Harry Reid. If there is ever something that has never been done before to gain partisan advantage, Republicans will be the first to do it, and Democrats will be the last to do anything about it.

It’s also true that any president generally deserves to get the cabinet he or she wants, but that ship has already sailed for President Obama, whose first choice for Secretary of Defense, John Kerry, got moved down the bench when Republicans torpedoed the President’s first choice for Secretary of State, Ambassador Susan Rice. Now, that was some disgraceful business, and President Obama’s reward for backing down from that fight was an even bigger fight over the Republican he nominated to fill the opening Rice created, enabled by the fight that Harry Reid backed down from. If protecting the minority’s right to block anything and everything is a bad idea today, it was also a bad idea three weeks ago. If it’s not a bad idea, then shut up.

Still, Hagel is who the President wants now, and all indications are that he will get him. That leads to this obvious question: If blocking a cabinet nominee is something that’s never, ever done, and even when one is blocked, he is expected to be confirmed anyway, what is the point of the confirmation process? If these hearings pretty much never lead to anyone being rejected, then why have them? If they were dedicated to honest, substantive inquiry and/or demonstration of qualifications, rather than to the delivery of politically motivated screeds and/or smooches, I would be all for them, but in their present form, they are useless. They ought to be conducted under a set of debate-style rules that actually serve some useful purpose to the public, and the vote should be designed to prevent this kind of partisan maneuvering. Instead of requiring 60 votes to approve a nominee, a supermajority requirement to block a nominee would more appropriately reflect the Senate’s “advise and consent” role.

The Republicans’ actions with respect to Chuck Hagel will probably hurt them with voters, who by now expect them to have learned how to work with the President a little bit, but by making Hagel miss the NATO summit, they make America look indecisive and weak in the eyes of the world.