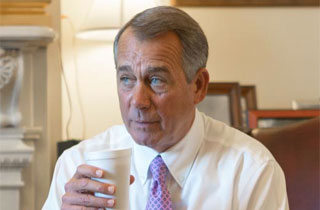 An Ohio bartender threatened to poison John Boehner and ended up being indicted this week over the death threats. He worked at a bar Boehner attended and claimed it would have been so easy to slip something in the Speaker’s drink to poison and kill him.

A story on Boston.com about this featured the headline “Would Anyone Have Noticed if Bartender Succeeded in Poisoning John Boehner?” and made some rather snarky remarks about Boehner’s present health. Boehner’s office condemned the “insensitive” story, and the writer of that article has now been fired.

Victor Paul Alvarez lost his job as associate editor for Boston.com over the post in question. After being a bit coy on Twitter about the matter, starting with a picture from underneath a bus, Alvarez said he really regretted the post:

Ordered silent yesterday. Now I can comment: The story I wrote was awful. Tasteless. Mean. Bosses felt it was inexcusable. They fired me.

@museofhistory @Coondawg68 @TwitchyTeam I did not pine for murder. I made a tasteless joke that I clearly regret. Before I was fired and now

@loosecharm Based on wire stories which I thoughtlessly editorialized. http://t.co/JfsiXO6GDc has no Opinion tag, so it ran under News.

@finaidfool I'm not a crass piece of garbage, but I will not argue with the second part of your statement.

@Illuminatas I'm not outraged. I was wrong. I would have made that same mistake with a Dem as well, which still makes me a jackass.

Also, in case it wasn't abundantly clear, I'm looking for a job. I doubt there will be any offers. But I am available.

@boondagger No. Not me. But you're right about the article being moronic.

@RadioKenPittman Not a liberal. Don't have any hate. But I did make a mistake.

And it hasn’t even been that long since the last controversy involving Boston.com. Last month, the site reported on a Harvard professor who threw a fit over being charged four dollars more than what he expected. In a follow-up report, they posted some emails with racist language they said were from that professor. They weren’t, and a Boston.com editor got demoted after that fell through and they discovered she was selling t-shirts mocking the professor.