Voice of the Collective: Cronkite’s Death As Reported on Twitter

Voice of the Collective: Cronkite’s Death As Reported on Twitter 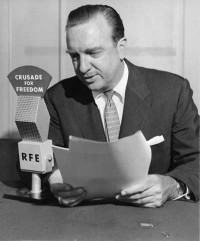 The way the world receives breaking news was obviously unheard of in Walter Cronkite‘s heyday. The voice of God role has been taken on by the voice of the collective, which is constantly informing us of the way it is. So it was that when I turned my Blackberry on as I was leaving a Friday night film I was inundated with tweets regarding Cronkite’s passing, which I read in reverse order. The first one to come through was Brian Stelter‘s at 8:11pm. Before I was even able to get home and in front of a computer I had been swamped with news. Here’s what it all looked like at a glance, in reverse chronological order starting at 8:11pm and ending around 11:30pm.

#
Patrick W. Gavin
@pwgavin: This might be the first time that I ever have empathy for whatever it is Andy Rooney must be going through.

#
Patrick W. Gavin
@pwgavin : If CBS’ “Face The Nation” was smart (and yes, it might sound opportunistic) they’d find a way to make this weekend’s show #1 for once.

#
Ann Curry
@AnnCurry: Obama: Walker Cronkite “invited us to believe in him, and he never let us down.”

#
Ann Curry
@AnnCurry: Tom Brokaw: Walker Cronkite “cared..passionately about the place of a free press in a democratic republic.”

#
Dan Abrams
@danielabrams As every major journalist in America tries to connect him or herself to the legendary Cronkite, the rest of us can ask “are you worthy?”

#
Patrick W. Gavin
@pwgavin : Interestingly–and telling–one of Cronkite’s rare quotes given towards the end was on Tim Russert in my Politico piece http://tr.im/sT3a

#
Brian Stelter
@brianstelter: Thanks for the Qs. Answers: Cronkite’s voice — which has opened “CBS Evening News” since 2006 — will be retired, probably immediately.

#
Maggie Shnayerson
@shnayerson: “I was eight, watching him on black and white television every night in Elmira, NY. In our home, my…” http://tumblr.com/xti2dnljh

#
Howie Kurtz
@HowardKurtz: True, @jeffjarvis, no one wants to return to voice-of-God anchors. Cronkite was a man of his time, of far fewer information choices.

#
Sarah Weinman
@sarahw: Cronkite was the news, even to Canadians years after the fact.

#
Karen Tumulty
@ktumulty: What you should watch about Cronkite: http://bit.ly/ORJCi

#
Jay Rosen
@jayrosen_nyu : Walter Cronkite (RIP) was a great journalist and a great broadcaster; those are different–but related–things.

#
Patrick W. Gavin
@pwgavin: WH: Cronkite (rightfully) bigger deal than MJ. Not hesitating to put out statement. “Set the standard by which all others have been judged.”

#
Ann Curry
@AnnCurry: Cronkite’s legacy includes his worry that journalism has become too soft, too vulnerable to financial interests.

#
Rachel Sterne
@RachelSterne: RT @brianstelter Obama: “Walter invited us to believe in him, and he never let us down.” New Media Decoder link: http://bit.ly/xlWx3

#
Marc Ambinder
@marcambinder: CBS News plans a one hour special on Cronkite in place of 60 Minutes on Sunday. For more: @peterkingcbs, @cbsandrewcohn @markknoller

#
Brian Stelter
@brianstelter: Obama: “Walter invited us to believe in him, and he never let us down.” New Media Decoder link: http://bit.ly/xlWx3

Mike Madden
@mikemaddenAnd that’s the way it is.

#
Marc Ambinder
@marcambinder: RT @cbsandrewcohen “Funny and somewhat sad to watch cable channels, who break all of the rules by which Cronkite lived, now praising him…”

#
Jake Tapper
@jaketapper: RT @cbsandrewcohen “Funny and somewhat sad to watch cable channels, who break all of the rules by which Cronkite lived, now praising him…”

#
David Folkenflik
@davidfolkenflik: mister cronkite has signed off for the last time…

#
Jake Tapper
@jaketapper: fyi, it has already been done: #waltercronkite

#
Ann Curry
@AnnCurry: Watching Walter Cronkite cover Vietnam and the Civil Rights movement is why I became a journalist.

#
Jake Tapper
@jaketapper: deepest condolences to our friends at CBS @katiecouric @cbsandrewcohen @markknoller @cbskellywallace and everyone else —

#
Mark Knoller
@markknoller: I came to CBS News after Cronkite relinquished the anchor chair. I regret I never got to work with him. But his legacy will inspire always.

#
Marc Ambinder
@marcambinder: In the past few years, Cronkite kept an office at CBS News in New York and would visit the newsroom on occasion and pose for pictures.

#
Mark Knoller
@markknoller: I grew up watching Walter Cronkite. He was one of the reasons I admired and wanted to work at CBS News. A great journalist has died.

#
Gideon Yago
@gideonyago: Dateline: Heaven – you are there! RIP to Walter Cronkite, the Gold Standard. Was lucky to work with him in 2004. None better at the job.

#
Ann Curry
@AnnCurryNYT: Walter Cronkite has just died. At 92, his was a long life well lived.