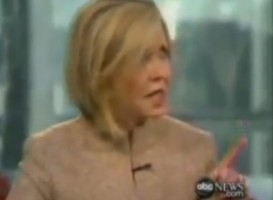 We reported last week that a government panel issued controversial new breast cancer screening guidelines, and predicted that the very real concerns they present would be twisted to raise concerns about the House health care reform bill.  Our prediction played out on Sunday’s This Week with George Stephanopoulos, as GOP Rep. Marsha Blackburn and Democratic Rep. Debbie Wasserman Schultz sparred about the new guidelines. Neither got it quite right, and George ran out of time.

The new guidelines call for routine mammography to begin at age 50 instead of 40, and for those exams to be performed every 2 years after age 50. They also recommend against teaching breast self-examination.

Blackburn started off by sounding the alarm about the reform bill, asserting that under the House bill, the new guidelines “become the law, the mandate.” This is false. The House bill does require qualified health plans to cover preventive services according to these federal guidelines or better. There is nothing to stop a health plan from covering more frequent screenings.

Debbie Wasserman Schultz points out that “every major cancer organization has come out against these recommendations,” but then she tries to sell the idea that “task force’s recommendations are simply recommendations. They… aren’t controlling.”

They are “controlling,” in that no qualified health plan can cover less.The effect will be that no plan will cover more.

What’s missing from this discussion is the fact that coverage for breast cancer screening will be limited by these guidelines whether the reform bill passes or not. Insurance companies already use recommendations from this panel to decide the number and frequency of preventive services they will cover. The “rationing” is here.

On the bright side, the inclusion of the new guidelines in the reform debate opens up the possibility that the new law will be written to make it harder to implement changes like this without a broader scientific concensus. Wasserman Schultz touches very generally on “changes to the language” of the bill.

Here’s the video of the exchange, followed by ABC News’ transcript:

STEPHANOPOULOS: … of the — of the guidelines saying that this is

going to lead to more rationing. Yet the American Cancer Society says

that the Republican alternative is worse, would do more harm than good,

wouldn’t give preventive services to anyone, and that under these bills,

preventive care is encouraged and actually required by insurance

companies. So isn’t that an improvement?

BLACKBURN: Well, actually, it is not. And the guidelines that came

into law, if they were to be put into law.

And, George, this is exactly how it happens. If you go to page

1,296 of the House bill, the engrossed copy, and you began to read in

title three of that bill, on preventive and wellness services, and you

bill, it changes the Preventive Services Task Force to the Clinical

Then, you go back and you see that that task force on preventive

clinical services is tasked with rating A, B, C, D, or I all preventive

services. Then you go back into section 222 of the bill…

BLACKBURN: Yes, I have read this bill. And that indicates what

would be paid or covered. And this is where the actual link comes, and

I’ll read it for you. In section 2301, it says, “All recommendations of

mammograms — “and the Task Force on Community Preventive Services, as

in existence on the day before the date of the enactment of this act,

STEPHANOPOULOS: So the guidelines — the point is that the

BLACKBURN: They becomes the law.

STEPHANOPOULOS: … would — would become…

BLACKBURN: They become the law, the mandate.

WASSERMAN SCHULTZ: No, they would not be.

BLACKBURN: Yes, they do.

WASSERMAN SCHULTZ: And what’s unfortunate is that the Republicans,

and Ms. Blackburn, have for the first time politicized breast cancer.

BLACKBURN: That is incorrect.

WASSERMAN SCHULTZ: That is — no, it is not. And I’m a breast

BLACKBURN: No, it is incorrect.

WASSERMAN SCHULTZ: As you know, as a breast cancer survivor, Marsha…

BLACKBURN: That is incorrect. It’s in the bill, Debbie.

STEPHANOPOULOS: Let her finish her point.

BLACKBURN: I have a great respect — yes.

WASSERMAN SCHULTZ: As a breast cancer survivor, I came out against

these — these recommendations. Every major cancer organization has

come out against these recommendations. The task force language in that

bill actually makes sure that prevention — preventive services like

mammograms and colonoscopies and other cancer screenings would be free.

The task force recommendations — the language in the bill…

STEPHANOPOULOS: Well, Debbie, let me — let me clarify this…

WASSERMAN SCHULTZ: … that even more women would get access to…

STEPHANOPOULOS: Excuse me for a second. That — that is true. But

let me clarify a little bit, because under the — the bill — and we

have — we have the language, as well. It says that a group health plan

and health insurance issuer offering the group (ph) shall provide

coverage, but only under — if the Preventive Services Task Force rates

STEPHANOPOULOS: And, actually, under the — under the task force,

they said that these mammograms for women 40 to 50 is rated C. So they

actually wouldn’t be covered. So you have a great expansion for a broad

part of the population, but actually, these guidelines would be

COBURN: As a physician who’s been…

STEPHANOPOULOS: Well, but the language here says they…

asking. Do these recommendations make sense from a cost standpoint?

Absolutely, from a cost standpoint, they’re right. You look at the

From a patient standpoint, they’re atrocious. And that’s the

problem with a bureaucracy stepping between a physician and their patient.

STEPHANOPOULOS: Can you weigh in on this?

NELSON: Well, absolutely. I — I worry about a government-run plan

that would be subject to recommendations that might be applied

universally without respect to patients. I am concerned about that, not

of them, and I am concerned that if it’s — if it’s turned over — look,

the insurance industry has its own challenges. And — and many of those

can be handled with transparency and by eliminating pre-existing

state level is as possible, you’ve got — you’ve got patient’s bill of

rights, you’ve got all kinds of mandated coverages, and — and this can

be handled on a state-by-state basis. It gets lost in Washington in a

big government-run plan, and I don’t know what happens.

STEPHANOPOULOS: But if you don’t have these kind of guidelines, how

NELSON: Well, I don’t mind guidelines and recommendations, but I

don’t want them to become the equivalent of rules and law.

WASSERMAN SCHULTZ: And we can’t…

BLACKBURN: And it says “shall.”

WASSERMAN SCHULTZ: We have to make sure that we’re not forgetting

about the people. And that’s what the task force forgot about this

week, is that we’re not thinking about big, amorphous blobs of — of

people. Making — these recommendations say that we can trade one life

to save the angst and anxiety in a — a larger group of women, and

experts, the cancer society, the colon foundation all came out against

this, and that won’t be…

STEPHANOPOULOS: … going to be changed?

WASSERMAN SCHULTZ: Actually, you know, I would invite you — I

BLACKBURN: Well, you know what? I think you and I need to work as

— together on a motion to instruct and get this language out of here,

BLACKBURN: … says that the HHS secretary has to do this. So, you

WASSERMAN SCHULTZ: No, we have different interpretations, but…

BLACKBURN: … Debbie is right when she says they forgot about

people. Indeed, they did. But we have to realize, this group that made

this recommendation, this isn’t some outside group. This is a part of

HHS. And when you look at the…

WASSERMAN SCHULTZ: It’s an independent group. That is not accurate.

WASSERMAN SCHULTZ: It is not a part of HHS.

BLACKBURN: No, it is a part of HHS.

WASSERMAN SCHULTZ: No, it is not.