Breitbart Board Members Reportedly Mulling Whether To Fire Steve Bannon 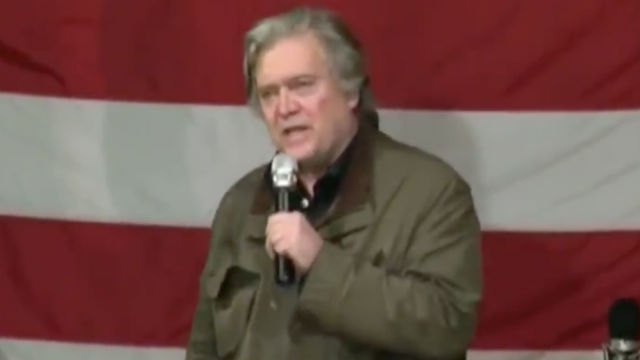 Is the clock ticking on Breitbart chairman Steve Bannon?

Following the release of a number of excerpts from Michael Wolff’s upcoming tell-all on the Trump White House that featured explosive comments from the ex-White House chief strategist, it is now being reported that there is a current discussion at Breitbart News over Bannon’s future.

Per the Wall Street Journal, the far-right news outlet’s board is currently mulling the decision, along with longtime Bannon benefactors Robert and Rebekah Mercer.

[The Mercers] and other Breitbart News Network LLC board members on Thursday were debating whether to oust Mr. Bannon as chairman, with many supportive of the move, according to a person familiar with the exchanges. Among the considerations are Breitbart’s contractual relationships with other entities, including Sirius XM radio, that involve Mr. Bannon.

Staffers at Breitbart, which Mr. Bannon has called his “killing machine,” described a “chaotic” day at the company, with writers—many personally recruited by Mr. Bannon—wondering whether he would last the day.

CNN’s Oliver Darcy took to Twitter to add that a source confirmed to him that there’s been an effort to have Breitbart CEO Larry Solov fire Bannon.

Person familiar confirms to me that there has been a "hard push" to convince Breitbart CEO Larry Solov to fire Bannon. Bannon/Breitbart spox not commenting. https://t.co/Coe0ixiU4c

Earlier today, White House Press Secretary Sarah Huckabee Sanders stated that the conservative website should consider getting rid of Bannon in the wake of his controversial remarks about Trump and his family going public. Meanwhile, Rebekah Mercer offered up a rare public rebuke of Bannon this afternoon, confirming that she was no longer backing him financially.