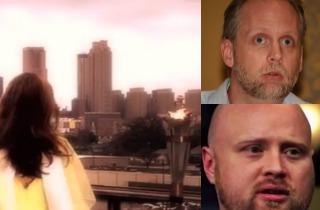 Conservative RedState.com columnist Ben Howe has been a reliably pro-Republican voice in American politics for several years. He is widely regarded as a respected opinion writer in the grassroots conservative movement – that was, at least, until his heretical contribution to BuzzFeed Politics. There, Howe ruthlessly criticized the trailer for an upcoming conservative film which he found to be trite and shallow. Howe said this work was indicative of the conservative movement’s inability to produce culturally-relevant art. This insult to an “ally” in the movement prompted a thorough denunciation from Breitbart.com editor John Nolte. In his rebuttal, Nolte lambasted Howe for doing “business with the devil to trash other conservatives.”

“[A] new production by the conservative nonprofit Tea Party Patriots, called A Movement on Fire, looks like it may do more harm than good,” Howe wrote in his BuzzFeed Politics post, “Another Terrible Conservative Movie.”

Don’t get me wrong. I agree with the general sentiments expressed in the trailer. I just wish they were expressed in a way that captivated. Instead, it’s cringe inducing.

Howe outlines why the trailer, which he saw played on multiple occasions at this year’s Conservative Political Action Conference, is lacking as an example of compelling art and cites several works which he thinks exhibit conservative themes and are far more watchable than this particular trailer.

“Now, the entire reason I’m writing this review can be summed up in my opening: I want a culture shift, and I want conservative artists to be taken seriously,” Howe adds. “It is my opinion that this Tea Party Patriots film does great damage to such an effort.”

Howe’s concerned critique earned him the rebuke of Nolte, who regularly castigates BuzzFeed Politics’ posts for attempting to set national political narratives rather than simply reporting on them.

Nolte criticized Howe for wrongly suggesting that the trailer is an effort to raise funds for a feature-length project. This is not the case, but Nolte said that Howe’s misleading assertion in the original post (the error has since been corrected) “sound to me as though Tea Party Patriots had decided to enrich themselves off the conservative suckers who enjoyed what they saw at CPAC where the two short films repeatedly played to enthusiastic crowds.”

Nolte went on to criticize Howe for publishing in the pages of BuzzFeed:

But why BuzzFeed Politics? Why publish there instead of within the conservative family at RedState? Why single out and ridicule your own at a left-wing site that considers the exploiting of conservative infighting (especially the Tea Party) as its mother’s milk? That was something else I asked Howe about. He replied that “he doesn’t think of BuzzFeed the way” I do, and that he “wanted to reach beyond conservatives.”

He noted that BuzzFeed proceeded to use Howe’s critique of the trailer to mock the conservative movement with their headline, “Why Can’t Conservatives Make Good Movies.”

“Whether driven by arrogance or naiveté, this is what always happens when conservatives do business with the devil to trash other conservatives,” Nolte wrote. “Imagine the excitement over at BuzzFeed headquarters (which is probably in a hollowed-out volcano) as they were handed the imprimatur of a RedState editor to trash the conservative film movement as a whole.”

Nolte noted that even Howe admits that the conservative CPAC-goers who viewed the trailer “applauded,” suggesting that the trailer’s target audience liked what they saw. “Howe felt some artistic sense of duty to strangle an allies [sic] project in the crib,” Nolte observed.

Over the three-plus years I ran Big Hollywood, many of our contributors managed to make these same points to right-of-center artists, but did so without using their superiority as a weapon against some poor unsuspecting ally.